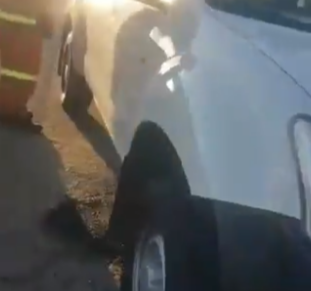 The JRA is 'embarrassed' after a video showed workers using a bakkie to flatten asphalt in a pothole repair job.
Image: Screengrab

It appears the Johannesburg Roads Agency (JRA) is particular when fixing potholes as no “normal vehicles” are permitted for the repair jobs.

At least that was the message on Monday after a video circulated on social media showing two workers doing just that.

The workers have since been suspended pending an investigation.

The JRA said it had noted “with great concern” a video circulated on social media in which JRA personnel in branded work wear could be seen using the agency’s “normal” vehicle that is “not authorised to conduct road maintenance, to compact and level asphalt onto a newly filled pothole in the Norwood area”.

The agency said what the officials were seen doing in the video was against the JRA’s standards and norms on road maintenance works, and “such behaviour was highly regrettable and condemned”.

Two of the officials identified in the footage have been placed on precautionary suspension.

“A full investigation on the matter was instituted to ascertain if there are other officials involved. Following the investigation, the necessary steps and actions would be taken to hold the officials in question accountable.”

According to the agency, an investigation report would be submitted to the office of the CEO in no later than 48 hours.

“The JRA prides itself in carrying out its work in the most professional, correct and respectable way without compromising the agency’s reputation and the safety and wellbeing of the community members and road users it is tasked to serve.

“Considering what has transpired, no number of words can fully express how shamed and regretful the JRA is by the actions of officials who should know better and do better at all times.”

The misfortune of whacking a pothole is one that most South Africans know all too well. That violent and unexpected thud followed by agonising over ...
Motoring
1 year ago

Fixing potholes will put Gauteng on road to prosperity, but how best to go about it?

All players agree cooperation is needed to improve province’s road infrastructure. What’s lacking is a clear strategy
News
1 year ago

Boardroom politics have allegedly paralysed the agency responsible for Johannesburg's "war on potholes", which spent less than 20% of its capital ...
News
1 year ago