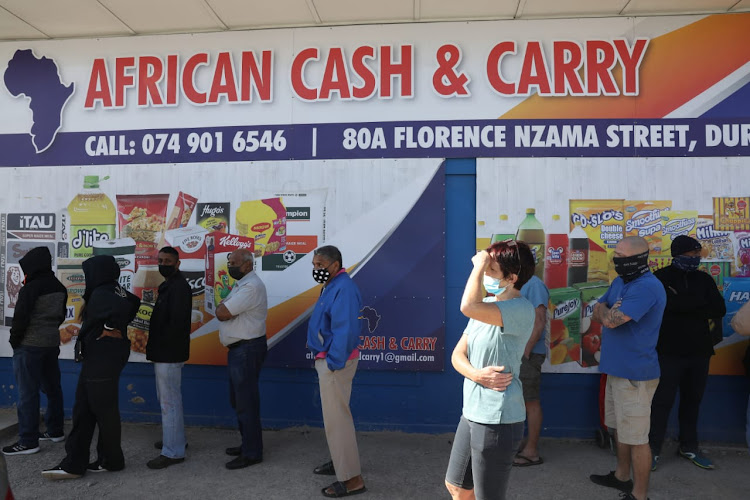 Hundreds of KwaZulu-Natal residents spent hours in snaking queues on Thursday when shops reopened, after several days of looting and violence brought the province to a standstill.

At Windermere Centre in Durban, only 20 people were allowed in at a time, with a 15-minute time limit at the few stores that opened their doors, including Shoprite Checkers, Woolworths, a fruit and veg shop and a pet shop.

Priyanka and Myushka Naidoo joined the queue at about 6am and walked out of the centre just after 2pm with 40 items between them.

“It was a drag — we spent more than eight hours waiting to get in. It was freezing when we got there and then Myushka walked home to get us hot chocolate. And then I had to go home for a toilet break,” said Priyanka.

“We watched Netflix and TikTok videos and spoke to the woman behind us. At about 11.30am we were starving and I took a walk to Florida Road to get us pizza, which was only ready about an hour later,” said Myushka.

'What is important is our lives': Retailers hit by looting plot comeback

"It often happens in difficult situations that our emotions can go from very high to quite low," says Massmart boss Mitch Slape.
News
6 months ago

“People were not being respectful or social distancing at Checkers. It was a bit chaotic. There was a lady who was buying up all the rolls because there was no bread,” said Myushka.

At Checkers she bought rice, frozen foods and toiletries.

“It felt like an eternity. There were so many times I wanted to quit. It was like a game show having a time limit and being restricted to a few items,” said Myushka.

A snaking queue outside the Atrium in Overport on Thursday as people wait patiently to buy essential goods. pic.twitter.com/mCfdmun6MF

Another shopper, Kevin Pearson, said he had been in the queue for more than an hour and still had a long way to go to get into the Checkers store.

“At least the queue is moving much faster than at Avondale Spar yesterday. It seems to be better organised, with monitors stopping people jumping the queue, which was why the queue hardly moved yesterday. So some hope at least, but we have been told that supplies may have run out by the time we get into the store.”

Scenes of long queues were all over social media, as people posted their experiences from Hillcrest to the south coast ahead of expected food shortages as a result of a number of warehouse and stores being looted or damaged.

Domestic airline Safair said on Thursday it would be sending bread and other essential food to KwaZulu-Natal while laying on extra flights to cater ...
News
6 months ago

As the city runs out of food, I join my fellow citizens in a desperate search for the essentials we once took for granted
Opinion & Analysis
6 months ago