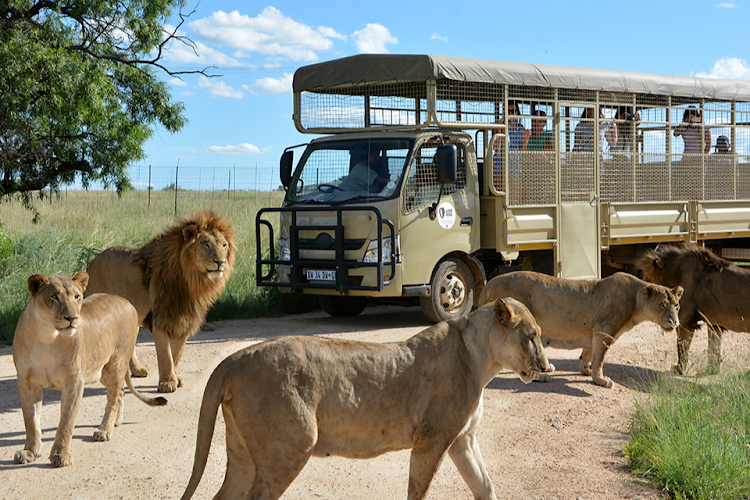 A pride of lions seen during a game drive in the Lion & Safari Park, near Broederstroom, Gauteng. File photo.
Image: Lion and Safari Park

The predators and antelopes at the Lion & Safari Park near Broederstroom, Gauteng, escaped harm on Tuesday after an uncontained wildfire burnt up to the facility's perimeter.

Despite widespread speculation on social media that the animals would need to be evacuated as the fire approached the park's boundaries, they were never in any danger, said GM André La Cock.

“There are firebreaks around the predator enclosures and the grass in the enclosures is kept green and short in the winter for this reason,” he told TimesLIVE.

The fire started near Hartbeespoort Dam and spread rapidly south through parched veld, forcing authorities to close roads while air traffic control at nearby Lanseria airport routed inbound aircraft 30km to the west to avoid smoke.

La Cock said his staff began battling the fire when it broke out early on Monday, finally getting it under control by the end of the day. The blaze flared up again on Monday night, however.

“Yesterday the wind picked up and the fire came roaring down the mountain,” he said.

Fire raging near Lanseria airport but flights not affected

A fire near Lanseria International Airport on Tuesday afternoon caused the redirection of road traffic, while the nearby Lion & Safari Park was on ...
News
4 months ago

The high temperature coupled with strong winds made the fire more intense, he added.

“This was by far the hottest fire I've experienced in the six years I've been here.”

La Cock said the response from the surrounding community was “fantastic” as volunteers came from as far as Pretoria and Joburg to lend a hand.

“We really appreciated the help from the community.”

The 600ha park is home to such predators as lions, cheetahs, wild dogs, leopards and hyenas as well as numerous plains game species such as giraffe and sable. With grazing in the antelope enclosures burnt out, the park would rely on feed and supplements brought in from outside while the vegetation recovered.

There had been no reports of any animals being caught in the fire.

Despite earlier fears that the fire might force Lanseria airport to close, airport operations manager Mike Christoph told TimesLIVE on Tuesday that the only problem was smoke obscuring visibility for traffic inbound from the north.

“There is lots of smoke, which obviously affects low flying,” he said.

Traffic approaching Lanseria from the Pelindaba nuclear research facility, which lies directly to the north of the field, had been rerouted 30km to the west.

Even if the fire had reached the airport, the perimeter was surrounded by well-maintained fire breaks, he added.

Deaths, hospitalisations and mental health issues rise, while productivity wanes in the face of climate change
Lifestyle
4 months ago

Farmers said many of their animals had perished in the flames.
News
4 months ago