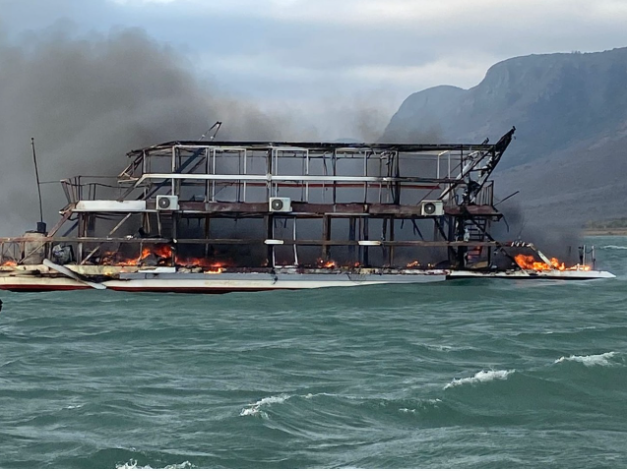 A fire on the Shayamanzi I has led to the death of a crew member and guest.
Image: Supplied

“We are heartbroken to inform you, that as a result of a fire on Shayamanzi l, a tragic accident has resulted in a loss of life of one of our guests and a crew member. A second crew member is missing.”

This cryptic message is the only information released and confirmed by Shayamanzi Luxury House Boats, a long-established family-owned business operating on Lake Jozini near Pongola in northern KwaZulu-Natal.

The large houseboats offer guests cruises, good fishing and a luxury stay on a dam surrounded by the Lebombo mountains with superb wildlife all around.

While it is not yet known exactly what happened, it appears that the fire happened on Shayamanzi I — a 25 metre by 8 metre double pontoon houseboat that was first launched by KwaZulu-Natal agriculture and environmental affairs MEC Dr Narend Singh on October 18 2002.

According to the Shayamanzi website, the boat has six en suite cabins serviced by four crew, two tender boats and an eight-seater jacuzzi.

“As a long-established family-owned business, we are devastated and are doing everything possible to understand and support the investigation and impact on our guests, crew and their families.

“On behalf of the Shayamanzi Team, our sincere condolences. Our thoughts and prayers are with you all. We mourn with you,” said family spokesperson Kim Blevin in the only statement released by the family.

She said more communication will be released at a later stage, but for now no other information would be made available. She said family members were out at the scene and people were still in shock and battling to deal with the unfolding tragedy.

Shelley Seid spends a hot weekend on the water Jozini Dam is best known as a prime tiger-fishing destination. Situated in northern KwaZulu-Natal, ...
Lifestyle
8 years ago

Why stay on land, when you can board a boatel? From a converted superyacht in the heart of London to houseboats in the Western Cape and ...
Lifestyle
6 years ago

Police search and rescue teams have located the bodies of three fishermen who drowned after a hippo attacked and capsized their raft at Jozini Dam in ...
News
11 months ago

NDUMISO NGCOBO | Take me away to anywhere but here

Where the ellie am I? Magnificent KZN tusker gets a new home

Tembe’s elephants are being rehomed to contain their numbers, boosting tourism and conservation elsewhere
News
1 year ago