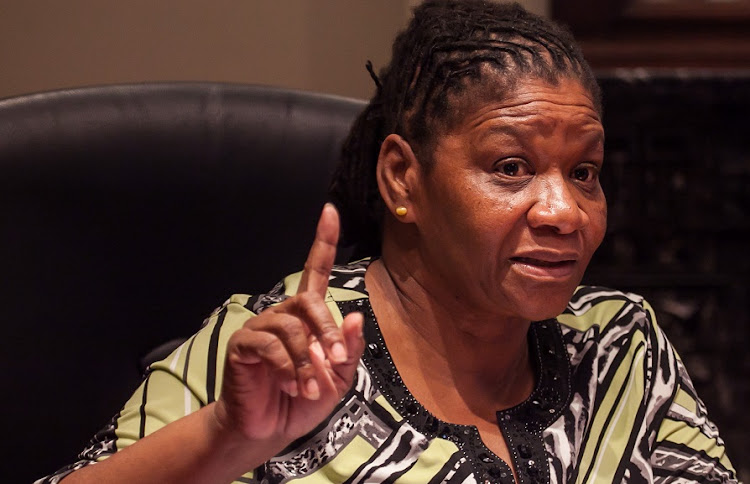 Modise, her deputy Thabang Makwetla and minister in the presidency Mondli Gungubele were prevented from leaving a meeting with disgruntled military veterans, forcing police and security forces to intervene.

The veterans barricaded the doors with chairs and refused to allow the three officials to leave.

Gungubele said the meeting broke down when consensus couldn't be reached, and a decision was taken to adjourn.

“As we were leaving the meeting, proceeding to the doors, they [the military veterans] closed the doors. It is at that point we realised we were held hostage. It is a situation which was averted by the security forces, very effectively and successfully,” he said.

SAPS spokesperson Brig Vish Naidoo confirmed that police “penetrated the room where the hostages were being held”, and that no shots were fired.

“At approximately 7:15pm police received a report of a possible hostage situation in which two cabinet ministers and a deputy minister were allegedly taken hostage. After attempts to negotiate with the hostage takers to release the hostages had failed, police resorted to a tactical approach and successfully rescued the hostages. There were no shots fired during the rescue.”

Fifty-six people have been arrested and will likely face charges of kidnapping.

South Africans were shocked and took to social media to react to the reports. Many likened it to a Hollywood movie, while others questioning where the ministers' costly security staff were.

Yaz I still can't Believe a whole Defence Minister Thandi Modise is being held hostage,Yifilim Lena yaz I Mean are we even safe as Citizens.💔💔😏😏#MinistersHostage pic.twitter.com/1ZDgFBxABT

South Africa is actually a movie scene yazi. They should just move us to Hollywood cause wow le country 😂😭😭🤣 #MinistersHostage pic.twitter.com/lZRxhS1mfG

Yoh!!! I would love to be a guest at this St. George's hotel right now!! 😅 🔥 The DRAMA!#ministershostage pic.twitter.com/SXp2XtU4yN

No Helicopter, No loudspeaker, No "the building is surrounded"...not even one thing like how they rescue presidents in those American Movies ? Mos ntwe be e no ba friendly 🙄🙄....South Africa ya bhora shem #MinistersHostage pic.twitter.com/S6C1R5Ptpz

Leadership failure - period. Surely we should be able to find each other before things become this bad. #MinistersHostage pic.twitter.com/qhJcEEgW8S

Defence minister Thandi Modise was reportedly "held hostage" at the St George's Hotel in Tshwane on Thursday.
Politics
8 months ago

A Durban businessman was allegedly held for seven days by his kidnappers before his family received a R10m ransom demand.
News
8 months ago

Fourteen suspects are facing the law after being arrested on Wednesday by traffic officers for allegedly holding passengers of luxury buses hostage ...
News
8 months ago