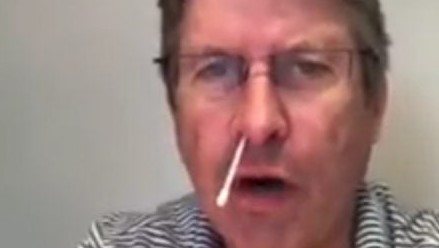 Stephen Birch as he appeared in a video he posted on social media about government Covid-19 testing kits.
Image: Stephen Birch

A Cape Town man arrested at the start of the Covid-19 pandemic last year for allegedly spreading fake news is off the hook after the state was told on Thursday to “get its house in order”.

The Cape Town magistrate's court struck the case from the roll after the state asked for a postponement as Stephen Birch was set to plead to the charges against him and start his trial.

The prosecutor told the court the state's witness had tested positive for Covid-19 and was not available.

In April 2020, Birch was among the first people arrested under Covid-19 regulations which, among other things, prohibited publication and spreading of false information about the pandemic and government's response.

Criminal charges have formally been opened against a Cape Town man who claimed that the swabs used to test for Covid-19 were themselves contaminated ...
News
1 year ago

The regulations came into force after a national state of disaster was declared in terms of the Disaster Management Act on March 15 last year and the country was placed under a full lockdown.

Birch, 55, from Parow, posted a Facebook video of himself with a cotton earbud stuck up his nose, alleging that the government's Covid-19 testing kits were contaminated and spreading the virus.

He urged people not to allow themselves to be tested by government health workers.

Advocate Paul Tredoux, for Birch, objected to the postponement on the basis that the state “has no case” against Birch and his right to a fair trial was being trampled upon.

The only statement he had received about the state's evidence was from the absent witness, who said they “read fake news” published by Birch on social media.

Tredoux said the state would need to prove Birch's allegations in his video were, in fact, wrong.

“If they can't prove that the state's testing kits aren't contaminated, then they don't have a case,” he said.

He alleged the state knew before Thursday its witness was ill, saying the prosecution “did not have the decency” to inform him the trial would not start, which would have saved Birch the cost of paying his two-man legal team for their day's work.

Tredoux asked that the case be scrapped or removed from the roll until the state had sufficient evidence to prosecute his client.

Fake news has resulted in deaths in the past. Will it do so again?

This is the story about Stephen Birch, who said swabs used to test for Covid-19 were contaminated.
Ideas
1 year ago

Magistrate Stephen Melusi Bengequla said: “This case was one of the very first cases brought before this court ... for contravention of the Covid-19 emergency regulations on April 7 last year. I thought that by now this matter would be finalised.

“We are a constitutional state. This case flies in the face of the constitutional rights we have to uphold. I'm going to remove the matter from the roll to avoid further prejudice to the accused until the state gets its house in order.”

Birch told TimesLIVE afterwards that if he is acquitted or the case against him is dropped, he is willing to publish evidence he gathered about a conspiracy he claims to have uncovered.

Birch created a Twitter account to spread awareness about his arrest and his first tweet in December said: “It's time to investigate the global correlation of swabs used versus deaths - Covid 19".

Hofmeyr, Malema and De Villiers are not among Birch's 12 Twitter followers.

Gauteng is seeing a dramatic increase in Covid-19 infections but there have been fewer hospitalisations and deaths, Dr Mary Kawanga of the premier’s ...
News
1 month ago

Dutch health authorities called for preflight Covid-19 tests regardless of vaccination status for travel from outside the EU, revealing that about ...
News
1 month ago

EUSEBIUS MCKAISER | Don’t be a selfish git — get vaccinated

Opting out of ethical duty would be the equivalent of deliberately defining yourself outside of community. Society itself would collapse if each one ...
Opinion & Analysis
1 month ago