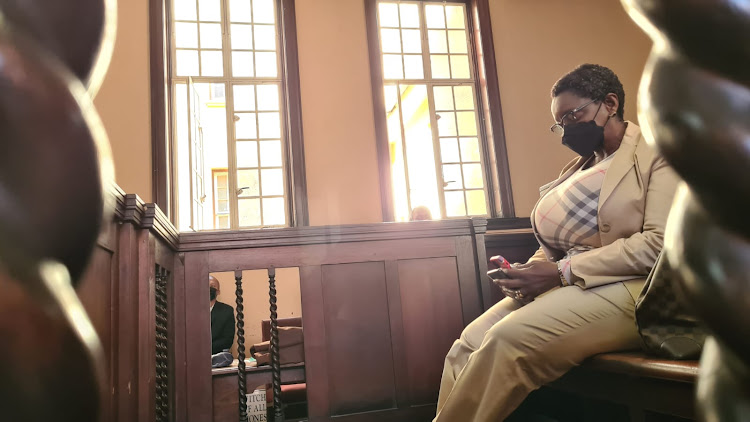 Bathabile Dlamini was on Friday sentenced for perjury at the Johannesburg magistrate's court.
Image: Alex Patrick/TimesLIVE

ANC Women’s League (ANCWL) president Bathabile Dlamini was on Friday sentenced to a R200,000 fine for perjury, of which half was suspended.

If she does not pay, she faces four years’ imprisonment, of which two are suspended for five years.

This after the Johannesburg magistrate’s court recently found her guilty of perjury.

Dlamini’s lawyer negotiated with the court after the sentence was handed down, leading to an agreement that she would pay R20,000 on Friday, with the balance — R80,000 — by April 29.

When sentencing Dlamini, magistrate Betty Khumalo was scathing about her conduct, saying she showed no remorse for her actions. She had taken an oath when she became a minister, which she broke, and caused the events that led to the 2017 social grants crisis.

Dlamini, who previously served as minister of social development, was found to have lied under oath during her testimony in an inquiry into her role in the debacle.

ANC Women’s League president Bathabile Dlamini is due to be sentenced in the Johannesburg magistrate’s court on Friday after she was convicted of ...
News
1 month ago

Dlamini was convicted last month, with Khumalo saying she was satisfied Dlamini had in her written statement and oral testimony given false evidence under oath at an inquiry instituted by the Constitutional Court.

One of the issues investigated by the inquiry, headed by retired Gauteng judge president Bernard Ngoepe, was whether Dlamini had appointed work streams of the SA Social Security Agency (Sassa) to ensure the agency could take over the payment of social grants from Cash Paymaster Services.

The ConCourt said the inquiry found Dlamini appointed individuals to lead the parallel work streams and those individuals reported to her. The work streams were supposed to report to the Sassa executive committee, not to the minister.

Ahead of her sentencing, her lawyer had pleaded with the court to be lenient on Dlamini, who was said to earn R110,000 a month which she used to take care of her immediate and extended family. She told the court she received a R40,000 monthly pension payment from parliament as a former MP and R70,000 from the ANCWL.

The ANC has appointed Thandi Modise to lead a task team to determine if the leadership of the ANC Women's league should remain in office.
Politics
2 months ago

Tshepiso Mphahlane, for Dlamini, said the 59-year-old single mother of two may soon see an end to the R70,000 pay cheque because this was not a permanent position. With the league’s conference scheduled for June, Mphahlane said she may not be re-elected.

“When one looks at the position of the accused, a former minister at national level, if this kind of offence can be perpetuated at that level, what then should become of people down there? At the pinnacle of this offence is accountability. We expect a certain standard of honesty from our public servants,” he said.

“If you begin to trivialise this offence, and say it’s ‘just perjury’, we will be making a mockery of our justice system. It is imperative the public see the justice system in action, especially in cases such as this,” he said.

After the guilty verdict at the beginning of the month, the National Prosecuting Authority’s Phindi Mjonondwana said in sentencing the state should consider Dlamini was found guilty of fraud in the 2003 Travelgate scandal in which MPs were found to have abused travel vouchers. Dlamini was fined R120,000.

'You can’t have an ANC senior official saying I must resign': Dlamini won’t step down

“There are people who have done i’dudla ze zinto, big things, that are still enjoying their membership and their rights within the ANC.” - Bathabile ...
Politics
1 month ago

It doesn’t see being found guilty of fraud and perjury as reason to resign, but more as something quirky on a CV
Opinion & Analysis
1 month ago

Bathabile Dlamini must be stripped of all leadership positions

Bathabile Dlamini's perjury conviction demonstrates that the former minister was always serving her own interests, not those of the country.
Opinion & Analysis
2 months ago

Bathabile Dlamini found guilty of perjury — 5 things you should know

Millions of Sassa beneficiaries were left uncertain about whether they would receive their monthly grants.
News
2 months ago