Urgent appeals and a reward for information posted 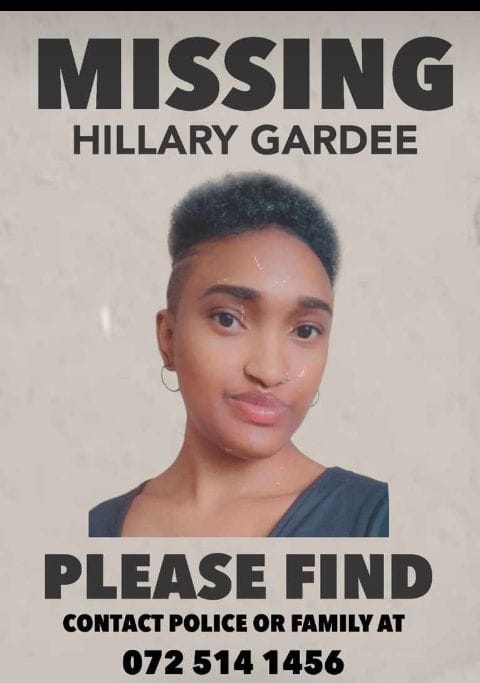 Hillary Gardee, daughter of attorney Godrich Gardee, has been missing for more than 72 hours.
Image: Supplied

Urgent appeals for help and a R100,000 reward for information have been offered for missing student Hillary Gardee.

The daughter of former EFF secretary-general and attorney Godrich Gardee disappeared on April 29.

She is last known to have gone shopping at a plaza in Mbombela (Nelspruit). She was wearing a black top and black trousers and was carrying a shopping bag and a laptop carrier.

Hillary’s uncle Moses Mbatha confirmed to TimesLIVE that his niece was missing.

“Locating her now is our primary focus. We don’t have anything more to say at this stage and need to keep communication open for incoming calls and information,” he said, referring to the tip-off line set up by the family.

He said his 28-year-old niece had disappeared with a three-year-old adopted child who had been rescued in a street in KamaGugu hours after the pair went missing.

“The child is fine and she is safely back with her mother,” Mbatha said.

Police spokesperson Col Donald Mdhluli said police are appealing for information that could help them find out what happened to Gardee, who lives in Kamagugu, outside Nelspruit.

“She was last seen on Friday when she went to the Spar supermarket in Nelspruit. The victim was with a three-year-old girl when they both vanished. Surprisingly, the child was found but Gardee was nowhere to be found. She was reported missing by her family on Saturday,” Mdhluli said.

He said by Monday afternoon, she had still not returned home.

She is about 1.6 metres tall, has a nose piercing and is light in complexion.

“Anyone with information that may assist police in tracing Hillary Gardee is urged to contact Det Const Sthembile Zitha on 0724740835 or call the Crime Stop number at 08600 10111. Alternatively, members of the public can send information via MYSAPSAPP. All received information will be treated as confidential and callers may opt to remain anonymous,” said Mdhluli.

Please help us; the daughter of our former SG Commissar @GardeeGodrich is missing. pic.twitter.com/V9McfjhUUx

"As an activist, as a commissar, your responsibility is to fight injustice," EFF leader Julius Malema told the party's former secretary-general ...
Politics
10 months ago

A KwaZulu-Natal teenager and her friend allegedly staged her kidnapping, made a video to create the impression she was being held captive and ...
News
2 months ago

EFF leader Julius Malema gushes over his wife, Mantoa, after the pair celebrate their seventh wedding anniversary.
TshisaLIVE
6 months ago