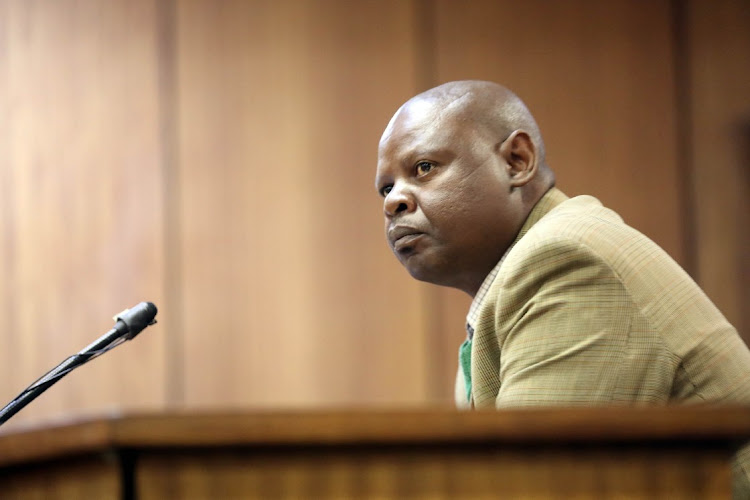 Sgt Thabo Mosia being cross-examined in the North Gauteng High Court by the defence team in the trial of five suspects accused of the 2014 murder of Senzo Meyiwa.
Image: ANTONIO MUCHAVE

A witness due to testify in the Senzo Meyiwa murder trial will allege that the footballer was shot by mistake by his girlfriend Kelly Khumalo, the high court in Pretoria heard on Wednesday.

Defence advocate Malesela Teffo said the same witness alleges that the revolver fired by Khumalo was brought to the Vosloorus home of Khumalo's mother by Longwe Twala, who had been dating the singer's sister Zandi.

This emerged during cross-examination of the first state witness Sgt Thabo Mosia, who handled forensics after the shooting on October 26 2014.

“A witness will testify that Meyiwa was allegedly shot by Nonhlanhla Kelly Khumalo by mistake. The same witness will further testify that the weapon used came with Longwe Twala and the firearm is a revolver,” Teffo said to Mosia.

The policeman said he had no comment on the assertions.

Teffo said the witness would also allege that removing Meyiwa from the crime scene [the house] by taking him to hospital was intended to conceal the circumstances in which he had been shot.

“All efforts were made to avoid the relatives and the friends or people known to Senzo, in particular that day as he was supposed to attend a birthday party of his friend. They were avoiding Pirates players to come to that house. Instead they deemed it fit for them to go visit Senzo at the hospital,” said Teffo.

Khumalo, her sister, their mother Ntombi, Twala and Meyiwa's friends Mthokozisi Twala and Tumelo Madlala were all at the home when the former Bafana Bafana and Orlando Pirates goalkeeper was shot in what was originally described as a scuffle with robbers.

Five suspects were arrested in October 2020 in Gauteng and KwaZulu-Natal. Muzikawukhulelwa Sibiya, Bongani Sandiso Ntanzi, Mthobisi Prince Mncube, Mthokoziseni Maphisa and Sifisokuhle Nkani Ntuli have been charged with murder, attempted murder, robbery with aggravating circumstances, possession of firearms without a licence and possession of ammunition.

A notorious 32-year-old KwaZulu-Natal hitman, who has been implicated in the murder of former Bafana Bafana captain Senzo Meyiwa, was sentenced to ...
News
6 months ago

‘When the time is right, the world will hear my voice’: Kelly Khumalo on Senzo Meyiwa case

"When I’m needed, and when the time is right, the world will hear my voice. They will not hear my voice when they feel they should,” Kelly said.
TshisaLIVE
2 months ago