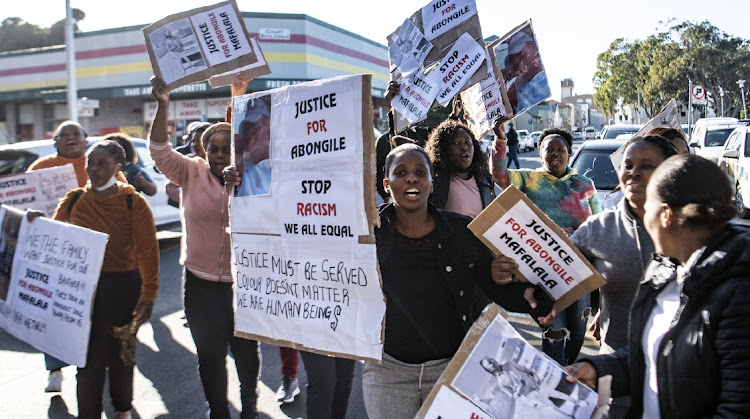 About 50 women from Du Noon protested outside the Wynberg magistrate's court in Cape Town on June 6 2022, demanding no bail for suspects in the Abongile Mafalala murder case. Mafalala was stoned, beaten and set alight by a mob that wrongly believed he had abducted a child in Parkwood.
Image: Gallo Images/Brenton Geach

On May 31, 30-year-old e-hailing driver, Abongile Mafalala accepted a ride request in Parkwood, near Grassy Park in the Western Cape. When he left his home at 6am that morning, it would be the last time his family ever saw him alive.

As Abongile entered Parkwood, he found himself at the centre of a social media and real-world storm which had been brewing in the neighbourhood for a few days. Residents had been receiving reports of multiple attempted abductions of children in the area, and suddenly Abongile found himself the subject of these allegations, unsubstantiated rumours and a deadly mob mentality.

In this week’s spotlight minisode, True Crime South Africa looks at this horrific case and how it might have been prevented.

We also discuss the sentencing of Ruan van Heerden, who murdered his mother and attempted to murder his father in 2020.

PODCAST | Killing Johannes Doe: The crimes of Plank and Swart

In the early hours of February 1 1989 passersby on a road near Germiston saw a car engulfed in flames, and a man nearby kneeling with his hands ...
News
3 weeks ago

In this week’s Spotlight Minisode, 'True Crime SA' focuses on two cases, the ill-fated rulings that facilitated them and the crimes for which the ...
News
1 month ago

Serial rapist Jaco Steyn preyed on young girls in Gauteng. He committed most of his heinous crimes on a Sunday.
News
1 month ago