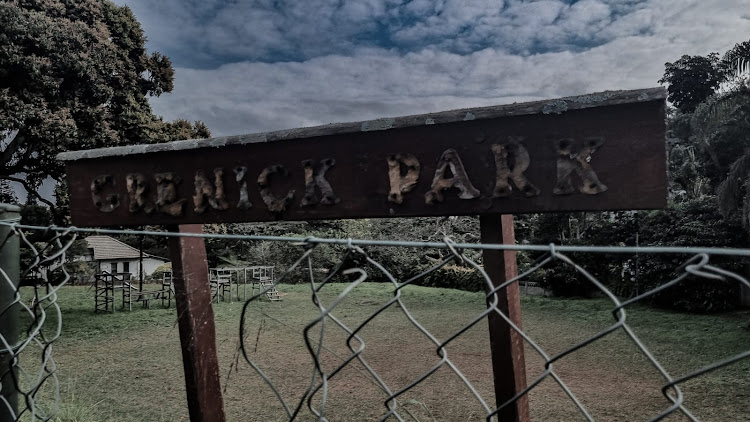 Grenick Park is near the home where a police officer is alleged to have mistakenly shot his 12-year-old son in Mayville, Durban, on Sunday morning.
Image: Orrin Singh

A blue double-storey home is nestled among shrubs and trees on a quiet, winding road that cuts through a section of natural grassland habitat in the suburb of Manor Gardens in Mayville, Durban.

It is at this home where a Durban policeman is alleged to have mistakenly shot his 12-year-old son amid cries for help on their property on Sunday morning at about 10am.

Speaking to TimesLIVE on condition of anonymity near the scene on Monday, a neighbour said he and his wife were the first to arrive at the property after four gunshots were heard coming from the home where a 39-year-old police officer lives with his partner and three children.

“We heard the gunshots and ran out to see what was going on. There was no previous record of gunshots at that home — we hear gunshots fairly often in the area, but normally from the other side where the informal settlement is, not on our road.”

According to an incident report which TimesLIVE is in possession of, it is alleged that the father had been asleep upstairs when he heard his son shouting for help.

The officer ran from upstairs and saw an unknown person at their window before retrieving his state firearm and firing four times through the window from inside the home, unaware that his son was outside.

The Independent Police Investigative Directorate is investigating a case of murder after a Durban officer allegedly shot and killed his 12-year-old ...
News
2 weeks ago

Two bullets hit the child, one in the chest and one in the foot, before he was rushed to Life Entabeni Hospital where he succumbed to his wounds.

The neighbour said the family were “good people”.

“They are good people, a tight family, I know them fairly well. I was in hospital with them on Sunday afterwards, they were distraught. My wife brought the two other children to our house after the incident. When we managed to contact the extended family they were picked up from here.”

According to the neighbour, the police officer held an administrative position at station level.

“We would see them often and greet them. They were building a family home, [they are] good people.”

“The investigation is ongoing and sensitive at this stage. The accused was arrested and a postmortem is being conducted. The accused will appear in court soon.”

Former Durban-based police officer Col Rajen Aiyer, who was fired from SAPS in 2018 after a complaint of intimidation, has been arrested and charged ...
News
2 weeks ago

A 46-year-old police officer was arrested for lying about losing his firearm, claiming he was robbed by three men.
News
3 weeks ago

Passerby wounded during Melville shoot-out between robbers and security

A passenger in a vehicle passing through crossfire between robbers and a reaction officer was shot and injured in Melville, Johannesburg on Monday ...
News
3 weeks ago