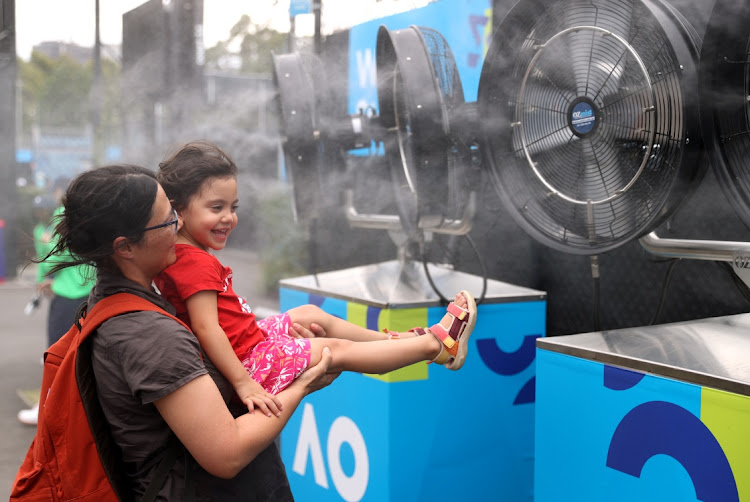 Fans are seen cooling off. Crowd capacity for this years event has been capped at 30,000 following the outbreak of the coronavirus disease (Covid-19).
Image: REUTERS/Loren Elliott

Health authorities in Australia's Victoria state ramped up contact tracing and prepared for more mass testing of residents in Melbourne on Thursday as the number of infections in a new Covid-19 cluster linked to a quarantine hotel rose to ten.

More than 22,500 test results were conducted in the past 24 hours in Australia's second most populous city and authorities urged Melbourne's residents to get tested amid fears of community transmission from infected workers at the Holiday Inn in the city.

Two new cases were reported on Thursday, both primary household contacts of Holiday Inn hotel staff, Victoria's state health authority said in a statement. Two cases reported on Wednesday had included a hotel worker and a returned traveller who had exited quarantine on Sunday.

The new outbreak in Melbourne, where the Australian Open tennis tournament is under way, has stirred fears of a fresh wave of infections in the state hardest hit by Covid-19.

Victoria had more than 20,000 cases last year and over 800 deaths, forcing authorities to implement a strict lockdown lasting more than 100 days, the most severe action taken by any Australian state.

The latest outbreak was likely sparked by a medical device known as a nebuliser being used by a Covid-positive guest at the hotel.

Australia has been among the world’s most successful countries in handling the novel coronavirus, largely because of decisive lockdowns and borders sealed to all but a trickle of travellers, with some 22,000 cases and 909 deaths.

But its quarantine hotels, where all international arrivals spend two weeks, have proved to be a weak link in its defences with the cluster in Melbourne the latest to emerge from one.

Australia was one of the first countries to call for an inquiry into the origins of Covid-19, which was first reported in the Chinese city of Wuhan, an action that sparked a diplomatic backlash from Beijing which has since slapped hefty duties or banned several Australian products from its shores.

The Sydney Morning Herald reported on Thursday that an Australian scientist, part of the World Health Organisation (WHO) team investigating the origins of Covid-19, told the paper he believed the virus began in China, despite WHO’s official findings remaining inconclusive.

“I think the evidence for it starting elsewhere in the world is actually very limited. There is some evidence but it’s not really very good,” said Professor Dominic Dwyer, a microbiologist and infectious diseases expert with NSW Health.

Since the Covid-19 pandemic first hit South African shores in March 2020, frontline workers have worked tirelessly and at great personal risk. Stories of sacrifice and loss, both personal and professional, are plenty on the country's frontline. While infection numbers drop and the arrival of vaccines brings renewed hope, these workers have seen this trend before. They're gearing up for an inevitable third wave. From ambulance, to hospital, to graveyard - MultimediaLIVE takes you to the frontline of SA's fight against Covid-19.

Paula Badosa, the only Australian Open player to test positive for Covid-19 in the leadup to the Grand Slam, bowed out "sad and disappointed" from ...
Sport
1 year ago

American teenager Coco Gauff said she felt right at home among her spectator contemporaries on the John Cain Arena court on Tuesday as she knocked ...
Sport
1 year ago

DAVID ISAACSON | If Covid is not Aussies’ real issue, maybe SA has lost its appeal

If perceptions about SA are a problem, then we need to alter them, as India did
Sport
1 year ago

ANALYSIS | What now with vaccines? The most important thing is: don’t panic

We speak to the experts who reassure us that, in the long run, the good news may outweigh the bad news
News
1 year ago