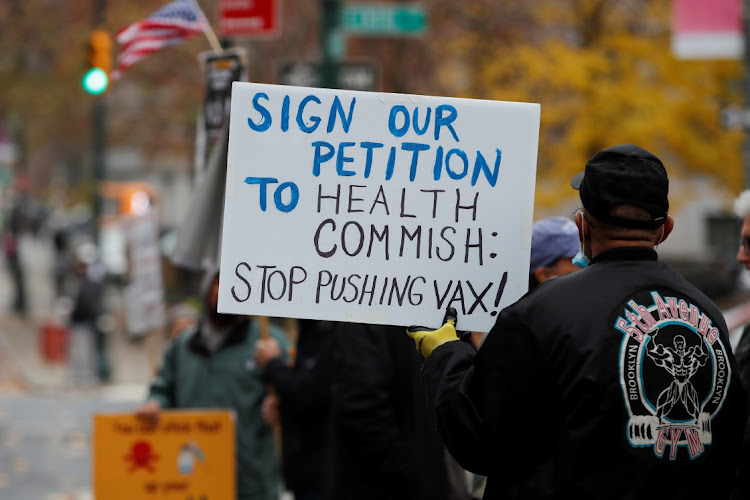 Protestors demonstrate outside the New York City Department of Health offices after New York City Mayor Bill de Blasio announced that all private-sector employers must implement Covid-19 vaccine mandates for their workers, as the highly transmissible Omicron variant has spread to at least one-third of US states, in New York, US, December 6, 2021.
Image: REUTERS/Mike Segar

New York City expanded its array of Covid-19 mandates on Monday, setting vaccine requirements for children as young as 5 years old and for workers at all private sector companies as the highly transmissible Omicron variant pushes into more US states.

The most-populous US city set a December 27 deadline for all 184,000 businesses within its limits to make their employees show proof they have been vaccinated, Mayor Bill de Blasio said.

In addition, children 5 to 11 years old must get at least one dose by December 14 and those 12 and older need to be fully vaccinated by Dec. 27 to enter restaurants and participate in extra-curricular school activities, such as sports, band and dances.

“Vaccination is the way out of this pandemic, and these are bold, first-in-the-nation measures to encourage New Yorkers to keep themselves and their communities safe,” de Blasio, who leaves office next month, said in a statement.

De Blasio's successor, Eric Adams, will evaluate the mandate and other strategies to combat the pandemic when he takes office in January, his spokesperson, Evan Thies, said.

The mandate means that many young people, or their parents, will need to scramble to get a shot to keep eating out or participating in after-school activities. Only about 27% of New Yorkers ages 5 to 12 have taken at least one dose and just 15% are fully vaccinated, according to the city's website.

Vaccination mandates are a divisive issue nationally, and views among adults about having to vaccinate children differed in New York on Monday.

Pia Fernandez-Vega, a resident of the borough of Queens, who was with her 14-year-old daughter, said: “We are a free country. If we are going to be mandated to have the vaccine, I think our freedom is being suppressed.”

Eunah Ainslie, also from Queens, said: “I think the mandate is great.” Ainslie said her niece and nephew both got Covid-19 at their day care centres and that she supports vaccines for children.

For adult New Yorkers, vaccination rates are much higher. About 89% have received at least one vaccine dose, topping the national rate of 83.5% reported by the Centers for Disease Control and Prevention.

Many companies, including several Wall Street banks headquartered in New York, such as Goldman Sachs Group Inc, Morgan Stanley and Citigroup Inc, already require vaccines for anyone coming into their offices.

A nationwide vaccine mandate issued earlier this year by President Joe Biden for companies with 100 workers or more was put on hold last month by a US appeals court  in New Orleans.

An administration request to a US appeals court in Cincinnati to reinstate the mandate  is pending.

Over the past week, the country has averaged more than 120,000 new infections a day, up 64% from the prior week, according to a Reuters tally. Deaths, which lag infections, have averaged 1,300 a day over the past seven days, up from a rate of 800 a week ago, according to Reuters data.

Omicron, first detected last month in Southern Africa, has spread about the globe and shows signs of being more contagious than the Delta variant, which is still dominant in the US.

Louisiana has also reported a probable Omicron case in a crew member on a cruise ship that disembarked in New Orleans over the weekend. At least 17 Covid-19 cases were detected on the ship, state health officials said.

De Blasio, a Democrat and strong proponent of mandates who has issued them for several sets of municipal workers, expressed confidence his latest order would withstand legal scrutiny, as his previous orders did.

Anne Dana, an attorney at the King & Spalding law firm, said the mayor's private sector mandate stands a better chance of going into effect than the Biden one because a similar city rule for restaurant, gyms and other private employers has already survived legal challenges.

Some 94% of 378,000 city employees are vaccinated, up from 86% in late October, just before the city began enforcing its mandate for emergency responders, a spokesperson for the mayor said. A total of 1,339 workers are on unpaid leave and 12,200 have medical or religious exemption requests pending, he said.

Both bad and good news: what scientists now know about Omicron

It will take much study, but what’s clear is Covid-19 will keep spreading and mutating while people remain unvaxxed
World
7 months ago

The pandemic gained new urgency this week on two fronts: deciphering Omicron and new strategies to get people vaccinated.
Opinion & Analysis
7 months ago

Whether naysayers like it or not, government’s focus on vaccines rather than lockdowns is SA’s only way forward
Opinion & Analysis
7 months ago