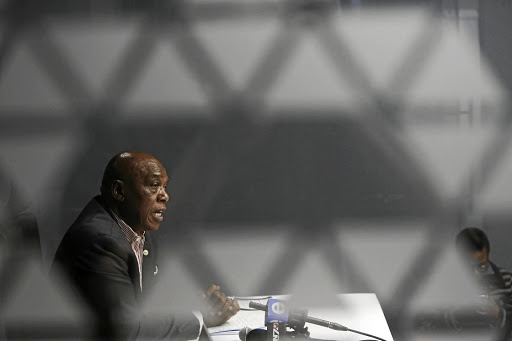 It has also called into question whether Public Enterprises Minister Lynne Brown deliberately lied to parliament about payments by state-owned entities to the company totalling more than R300-million.

Known Gupta associate Salim Essa has a 60% stake in Trillian.

Trillian to restructure business to ‘move away from the Gupta link’

Embattled Trillian Capital Partners chief executive Eric Wood has told TimesLIVE he will make a major announcement over the buying out of ...
Politics
5 years ago

During his release of the report, Sexwale said Essa, who failed to return calls for comment from The Times, had tried to convene an urgent board meeting on Wednesdayto remove him as chairman.

“I think it’s self-explanatory as to why he would want to do that.’’

The investigation was prompted after a former Trillian company CEO blew the whistle and reported the alleged corruption to former public protector Thuli Madonsela.

The report looks into allegations of state capture by TCP and the involvement of its chief executive, Eric Wood, and whether he had prior knowledge of former finance minister Nhlanhla Nene’s axing and replacement with Des van Rooyen in December 2015.

The main findings of Budlender’s report are that:

Budlender, in his report, slammed TCP management which he said “obstructed ” him in his investigation. He said a lack of co-operation from Wood and Trillian meant that his investigation could not be completed.
But Wood denied this.

He told The Times neither he nor any other Trillian management member had had a chance to give input.
‘‘Budlender said he tried to obtain information from us, but this is incorrect. We told him that we were anxious to appear before him, but he wrote back to say that he required
written information first.’’

Wood claimed an ‘‘impasse ’’ was reached as they had wanted to present oral testimony first, which would have provided the necessary context, ‘‘which we would have supported with written testimony’’.
He said Budlender refused this.

Budlender hit back, saying: ‘‘I told him to contact me directly. That was Monday last week. The first time he made contact with me was yesterday (Wednesday), after the close of business to say that he wanted to talk to me.’’

He said he had relied on the documents which he had received from Trillian, including an answering affidavit from Wood in a court case which Wood’s former company,
Regiments Capital, has against him, to conduct his inquiry.

Advocate Geoff Budlender is severely critical of Trillian's co-operation with his probe, the report into the investigation of Gupta-linked company ...
Politics
5 years ago

‘‘But we also expect our accusers to testify before the same inquiry so that the veracity of their allegations can be tested.’’Wood said when he first approached Essa to go into business, he had no idea about his connections to the Gupta family.

‘‘I knew about maybe one or two such as VR Laser and his small investment in Oakbay, but he was also an independent businessman with other investments not linked to the Guptas.‘‘I approached Essa for three reasons: he was black, has capital for business and I was impressed with his connections which could help us conclude business deals.‘‘I have put it to Essa about whether he was involved in anything untoward and every time he told me no. I took him at face value.

I believe people are innocent until proven guilty.’’But now Wood wants to buy out Essa. “The restructuring of our business is an absolute necessity now more than ever. That restructuring is to move away from the Gupta link‚” he said.