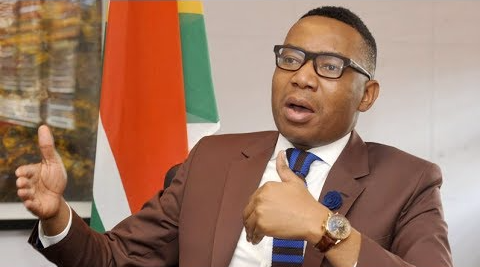 Deputy Minister of Higher Education and Training‚ Mduduzi Manana‚ has admitted to slapping a woman in a club in Fourways, north of Johannesburg.
Image: TimesLIVE

As one Johannesburg woman was nursing her wounds after allegedly being beaten by Higher Education Deputy Minister Mduduzi Manana at the weekend‚ a 22-year-old alleged she had suffered the same fate in Ermelo last month.

Zinhle Mokhohlane said she had done nothing to provoke Manana‚ alleging that he was ticked off by her entertaining a man who had been in his company.

“When [one of Manana’s friends called me over] I went over to find out what he wanted. All of a sudden‚ one of Mdu’s friends spilt beer on me‚” said the woman.

She alleged that a confrontation between herself and Manana ensued and her sister pulled her out of the club.

“Mdu followed us out. He threw me on the bonnet of the car and hit me on the face‚” said Mokhohlane.

“He beat me up until outsiders came [and intervened]‚” she said. Her sister called her aunt and uncle who rushed to the scene.

“My aunt hit Mdu and he attacked her. She went into the car and he then threw bricks at the car. He was also bashing it with his hands‚” said Mokhohlane.

“One of his bodyguards then took out a gun and fired two shots in the air. He didn’t point the gun at anyone. We were all shaken up and that is when the fight ended‚” she added.

The police arrived and allegedly retrieved the cartridges from the scene.

Mokhohlane said she did not drop the case. She was waiting for the police to give them an update on their investigation.

Mhaga told TimesLIVE that they were aware of the matter.

“Both the parties had opened cases against each other but both of them later dropped the cases‚” said Mhaga.

“This means there is no case‚” he said.

He could not disclose the merits of the cases.

Mokhohlane who suffered bruises to her neck and a scar to her face maintained that she had not dropped the charges but accused the police of dragging their feet because of Manana’s prominence.

Meanwhile‚ Mandisa Duma who claimed to have been assaulted by Manana at the Cubana night club in Fourways in the early hours of Sunday morning had since laid charges against him.

"On our side‚ the investigation on the matter is at an advanced stage and we will soon hand over the docket to the prosecutors‚" said Mhaga.

"My discussion with the [Gauteng] provincial police at the time (midday) was that our investigation is almost complete and it will be going to the NPA (National Prosecuting Authority). Hopefully by the end of today it will be handed to them‚" he said.

"Everything will be consolidated as one case so everyone (suspects) will be brought on board and ultimately the NPA will decide what must happen‚" he said.

Duma alleged that Manana lost his cool following a debate on who should succeed President Jacob Zuma at the ANC's elective conference in December.

She was with her friend and cousin at the restaurant while Manana was with his four friends. The club was already closed.

After the disagreement‚ Duma claimed Manana chased them out of the venue. While walking out Manana slapped her cousin across the face after she made a comment about his sexuality before turning on her in the parking lot‚ she said. A video clip of the incident circulated on social media on Monday morning.

Manana issued a statement‚ apologising about the incident which transpired with Duma.

He however‚ failed to respond to TimesLIVE's questions about the Ermelo incident. He did not reply to messages and his phone rang unanswered.