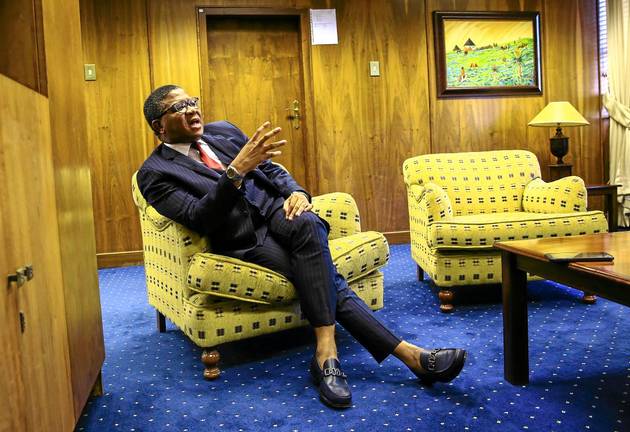 We will never surrender the ANC to stooges‚” Minister Mbalula said to the crowd’s applause. File photo
Image: SIMPHIWE NKWALI

Police Minister Fikile Mbalula says President Jacob Zuma will only leave his position as president of the country when the African National Congress wants him to.

Speaking to a crowd after a failed vote on a motion of no confidence in Zuma by opposition parties in Parliament‚ Mbalula said Zuma’s victory was victory for the people of South Africa.

He then went on to lash out at the opposition for pleading with ANC member to vote with their conscience.

The ANC has been tested over time. This is not the first test or the last. The ANC will survive….We will never surrender power to Mmusi Maimane.

He is a stooge. He does not represent the interest of our people. We will never surrender the ANC to stooges‚” Mbalula said to the crowd’s applause.

Mbalula said the motion of no confidence was a plan by the opposition parties to work towards unseating the ANC in the 2019 general elections.

“We know they are preparing for 2019. We will meet them toe for toe. We will continue to accelerate and ensure that we bring a better life to all our people‚” he said.

Dlamini says her ‘conscience’ did not land her in parliament

Social development minister Bathabile Dlamini says her "conscience" did not land her in parliament and has called for the defence of the ANC.
Politics
3 years ago

The speakers blared‚ the dancers sang‚ but a live parliamentary broadcast silenced thousands of ANC supporters gathered outside parliament to “defend ...
Politics
3 years ago

President Jacob Zuma has narrowly survived yet another attempt to have him ousted in Parliament.
Politics
3 years ago

For President Jacob Zuma to be removed from office a simple majority‚ or 201 of the 400 MPs that would make up the full assembly‚ need to support the ...
Politics
3 years ago

ANC members came out strongly in defence of President Jacob Zuma on Tuesday as Parliament debated the much anticipated motion of no confidence in the ...
Politics
3 years ago

One of President Jacob Zuma’s staunchest backers‚ water and sanitation minister Nomvula Mokonyane‚ says white people could not be allowed to ...
Politics
3 years ago
Next Article