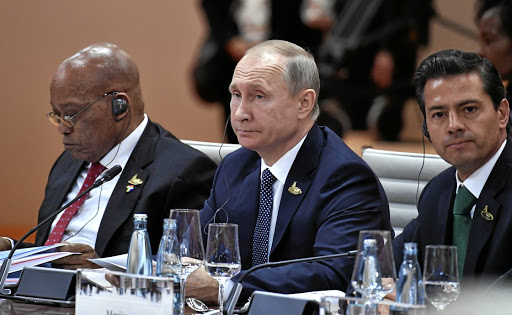 “We are highly disappointed to see yet another example of sensationalism and fake news in South African press‚ especially in an evident attempt to emulate the worst kind of groundless anti-Russian attacks by some of the global mainstream media‚” the embassy said in a statement.

“We consider this (a) slanderous piece‚ which is (as usual) based entirely on hearsay and unnamed sources … One could speculate that only a desperate‚ craving for extra publicity could force a once a reputable outlet (to) resort to tabloid-grade methods.”

The embassy said it was not aware of any Russian delegation coming to South Africa last week‚ as reported in the Sunday Times.

The paper reported that Zuma reshuffled his cabinet after meeting a delegation from the Russian government on Monday.

Zuma announced the removal of Mmamoloko Kubayi from the energy portfolio‚ replacing her with former state security minister David Mahlobo.

Mahlobo was trained in Russia after taking up the intelligence post in 2014.

President Jacob Zuma reshuffled his cabinet this week after meeting a delegation from the Russian government.
Politics
4 years ago

A Durban-based social cohesion forum - the Active Citizens Movement (ACM) - has accused President Jacob Zuma of acting with “impunity” and taking the ...
Politics
4 years ago

Deputy President Cyril Ramaphosa could be the next casualty of a cabinet reshuffle‚ an insider has told news channel eNCA.
Politics
4 years ago

If there was any doubt that President Jacob Zuma is a danger to South Africa's stability, his surprise cabinet reshuffle on Tuesday morning put paid ...
Politics
4 years ago