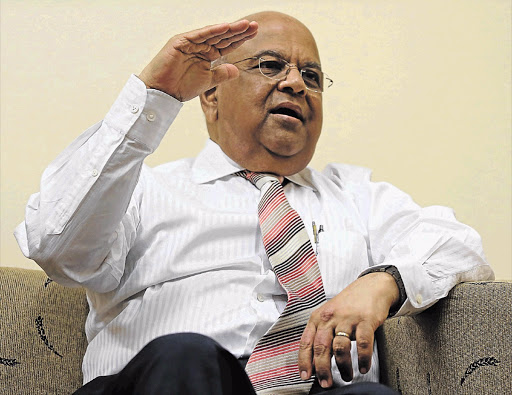 Gordhan has been appointed as a Visiting Professor in the Wits School of Governance‚ effective from tomorrow‚ 1 December 2017.

“He has played an integral role in South Africa’s history and we believe that his strong experience‚ sound public financial management and principled stand on good governance and transformation of the economy will add substantial value to the academic programme‚” said Professor David Everatt‚ Head of the Wits School of Governance.

“Gordhan’s strong views on corruption and financial mismanagement are well known – these are the vales that we want to impress upon our students‚ many of whom serve in the public sector.”

A KwaZulu-Natal civic organisation will be bringing criminal charges against “poo protesters” who disrupted an event at which former finance minister ...
Politics
4 years ago

Dean of the Faculty of Commerce‚ Law and Management‚ Professor Imraan Valodia‚ said: “This is a substantial appointment that will bode well for the Faculty. Mr Gordhan will join the likes of Nhlanhla Nene (Interim Director of the Wits Business School)‚ Max Sisulu and Tito Mboweni‚ all whom have held leadership positions in government. This is another step forward in strengthening the Faculty’s cohort of stalwarts whose knowledge‚ energy and experience will no doubt inspire the next generation of leaders.”

Professor Adam Habib‚ Wits Vice-Chancellor and Principal‚ commented: “Pravin Gordhan has a very successful track record in management of the public service. The skill sets that he has acquired through his years of managerial experience will be the basis of rich learning for the University and its students”.

The university added: "Gordhan embodies the values of Wits University and the School‚ Faculty and administration look forward to engaging with him in the near future".

Sach's resignation could push South Africa to the ‘fiscal cliff’

Gordhan has been instrumental in building and leading key institutions in South Africa and is highly respected in the public and private sectors.

He was actively involved in student politics whilst studying for his degree in pharmacy at the University of Durban-Westville. He was appointed as an executive member of the Natal Indian Congress in 1974 and was subsequently involved in building civic organisations and promoting non-racialism through campaigns on civic and political issues. He is a stalwart of the anti-apartheid struggle through the ANC and SACP underground and the UDF through the 1970s and 1980s.

When negotiations for a democratic South Africa commenced‚ Gordhan was appointed to the Steering Committee charged with steering CODESA. He also served as the Co-Chair of the Negotiating Process for the Interim Constitution and as Co-Chair of the Transitional Executive Council set up in late 1993 to prepare the country for democratic elections in April 1994.

He was elected a Member of Parliament for the ANC in 1994 and chaired committees of the Constituent Assembly and the National Assembly‚ where he played a critical role in setting up the foundations for legislation and policy‚ including drafting the White Paper on local government.

SA plagued by the disease of greed: Gordhan

South Africans need to fight institutionalised corruption, greed and state capture through mobilised activism that leads to action in the streets - ...
Politics
4 years ago

Gordhan was appointed Deputy Commissioner of the South African Revenue Services (SARS) in 1998 and then Commissioner in 1999. Internationally‚ he served as Chairperson of the World Customs Organization (WCO) and was also the Chairperson of the Forum on Tax Administration (FTA) within the Organisation for Economic Cooperation and Development (OECD) from 2008.

On 10 May 2009‚ President Jacob Zuma appointed Mr Gordhan as Minister of Finance. He was replaced as Finance Minister in 2014‚ becoming Minister for Co-operative Governance and Traditional Affairs. He was reappointed to the Finance Ministry in December 2015 and was again controversially replaced in March 2017.

He remains a member of parliament and has become a vocal critic of all entities who have fallen short of the high standards of performance‚ governance and integrity expected of them.