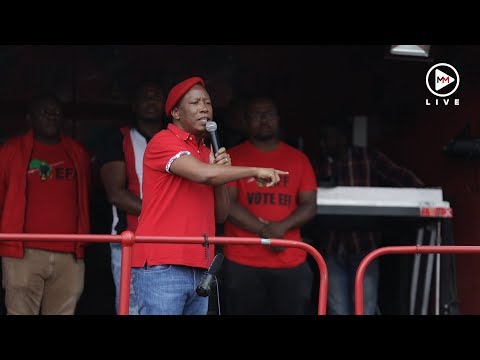 Malema on Tuesday likened Gordhan to a "dog" being handled by "white monopoly capital".

He urged his supporters to be prepared for "casualties" in a "war" being fought against Gordhan. He also accused the minister of having a hatred for black people.

Malema was speaking at a protest outside the commission of inquiry into state capture, where Gordhan was speaking.

The foundation’s executive director Neeshan Balton called Malema’s statements "inflammatory and reckless". He said the racialised nature of the attack was deeply worrying.

"We should be questioning why the EFF chooses to cast aspersions on Gordhan’s integrity on public platforms using language that is highly inflammatory. What is the 'loss of life' that Malema is claiming may occur in his 'fight' with Gordhan? Whose life  may be lost, how and why?

"If Malema indeed has information that points to the possibility of 'casualties' in this purported 'fight', should he not be taking the matter to the relevant authorities to avert such a scenario?" asked Balton.

Balton said the accusation that Gordhan hates black people and stifled black excellence was not only false, but in the context of Malema’s inflammatory speech and the party's repeated anti-Indian statements in the past, was a cause for deep concern.

He further criticised the EFF for continuing to try to paint Gordhan as being part of the Gupta family's efforts in the state capture project.

"Gordhan has been the very antithesis of state capture. If the Guptas had come to symbolise the capture of the state, then Gordhan was among those who represented state integrity. Despite the immense political pressure he came under, he was among a dedicated group of public representatives who repeatedly shielded our state coffers from those intent on looting it.

"As Gordhan himself has requested, if the EFF claims to have information against the minister that indicates otherwise, then the party should be prepared to come before the commission, present whatever evidence it may have and subject itself to cross-examination," he said.

Balton labelled Malema's conduct as an attempt to intimidate future witnesses at the Zondo commission.

"We should also be asking why Malema cast doubt on the integrity of the commission itself. If the EFF has not yet brought its evidence before a commission of this nature, but prefers agitating violence on the streets, we need to be questioning what are its real motives," he said.

"Until then, we should be questioning why the party continues running a smear campaign against someone who stood firmly against state capture when many others backed down."

What to do with a problem like racism? – Kathrada Foundation weighs in

Should racists be isolated from society or forced to do community service to atone for their destructive behaviour?
News
3 years ago

WATCH | Julius Malema repeats claim that ‘most’ Indians are racist

Economic Freedom Fighters leader Julius Malema has thrown down the gauntlet to Indians‚ reiterating controversial comments that “most” are racist.
Politics
4 years ago

Even the EFF's penchant for uniforms harks back to the Brownshirts of Hitler's Germany and the Blackshirts of Mussolini's Italy, as does Malema's ...
Opinion & Analysis
4 years ago

The South African Human Rights Commission (SAHRC) confirmed receipt of a complaint from the DA about remarks EFF leader Julius Malema made at Youth ...
Politics
4 years ago

Economic Freedom Fighters commander-in-chief Julius Malema has set the cat among the pigeons with his comments about Indians in KwaZulu-Natal during ...
Politics
5 years ago