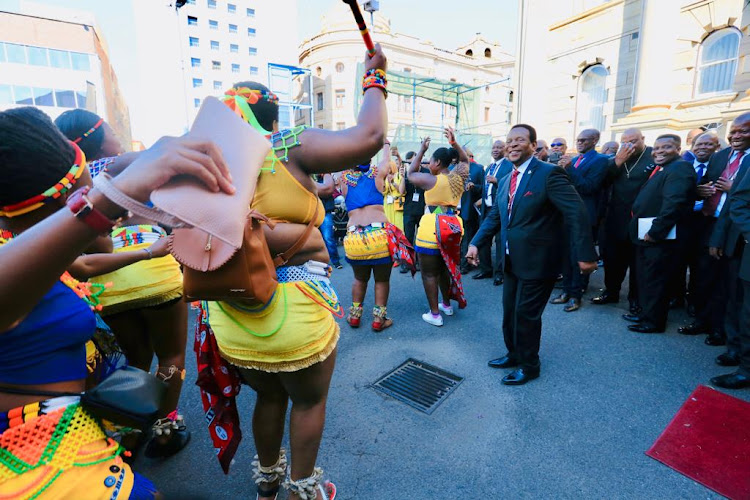 King Goodwill Zwelithini leads the singing of 'Amahubo' outside the KZN legislature on Thursday. He said KZN had 6.5-million hectares of land which was ready to be used.
Image: Jackie Clausen

The monarch also said the province needed a strong, constructive opposition for it to develop for the benefit of its people.

He was speaking during the official opening of the KwaZulu-Natal legislature in Pietermaritzburg on Thursday, ahead of the state of the province address by Premier Sihle Zikalala on Friday. 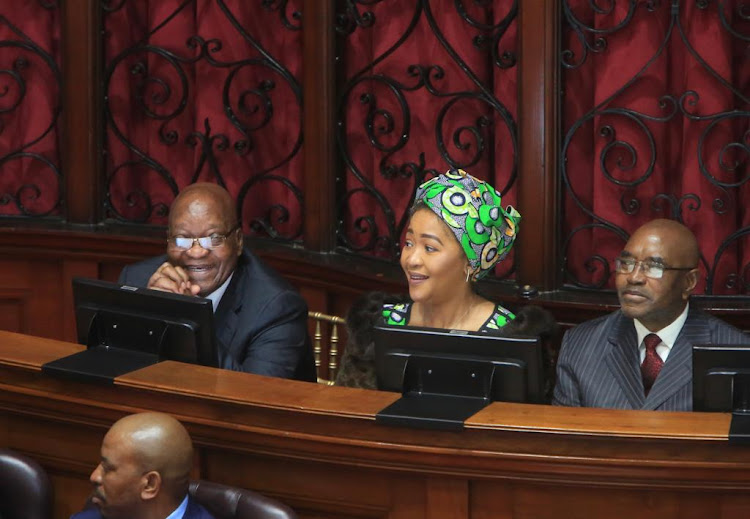 Former president Jacob Zuma and one of his wives, Thobeka Madiba-Zuma, were among dignitaries who attended the ceremony, which was this year held at the legislature building, after many years being held at the Royal Showgrounds.

As usual, the king was accompanied by a Zulu regiment and young maidens, who sang traditional songs for him outside the legislature after he had delivered his five-page speech.

King Goodwill told his audience that it was the responsibility of government to unite the people for the betterment of the country.

“This will always come through effective leadership that is capable of disagreeing with the public for purposes of providing direction. KwaZulu-Natal will never succeed if we have leaders that fear to take decisions that are not popular because of public sentiments which may be misdirected.

“It is also important to consider the role and importance of the opposition in the process of nation-building. The role of the opposition has been always been important in a democracy or in the consolidation of democracy. KwaZulu-Natal needs a strong, constructive opposition for the province to develop for the benefit of all,” he said.

Zulu monarch King Goodwill Zwelithini has lashed out at traditional leaders who are abusing women, calling their actions shameful to the Zulu nation.
Politics
2 years ago

He said the province was blessed to have vast tracts of land under the Ingonyama Trust Board, which administers hectares of tribal land on his behalf, as its sole trustee.

“In this province, figures tell us that we have six-and-a-half-million hectares of land which is ready to be used. Percentage-wise, nearly 82% of this land is ready for livestock farming and 18% is arable land,” he said.

“When you look at these numbers, they should tell you something about the value that many people rarely put on land and its potential. I am yet to see figures that will confirm exactly how much food we import from outside the province, particularly food that comes from other countries, when, in actual fact, we have the comparative advantage to farm the same food.”

He lamented the launch two weeks ago of only one agripark, after the government proposed agriparks four years ago and set aside R2.7bn for the purpose.

The king said the biggest challenge facing the country was that it was failing to guarantee food security for its citizens.

“Our communities have been degraded to the status of food purchasers rather than food producers. Any nation that cannot feed its people loses its pride and dignity. We, therefore, remain with a huge challenge of bringing back the dignity and pride of the citizens by assisting them to improve their agricultural production, especially in the area of food crops.”

Zulu monarch King Goodwill Zwelithini has lashed out at traditional leaders who are abusing women, calling their actions shameful to the Zulu nation.
Politics
2 years ago

A dispute over a cultural village being built for Zulu king Goodwill Zwelithini at his Enyokeni palace in Nongoma, which was halted after forensic ...
News
3 years ago