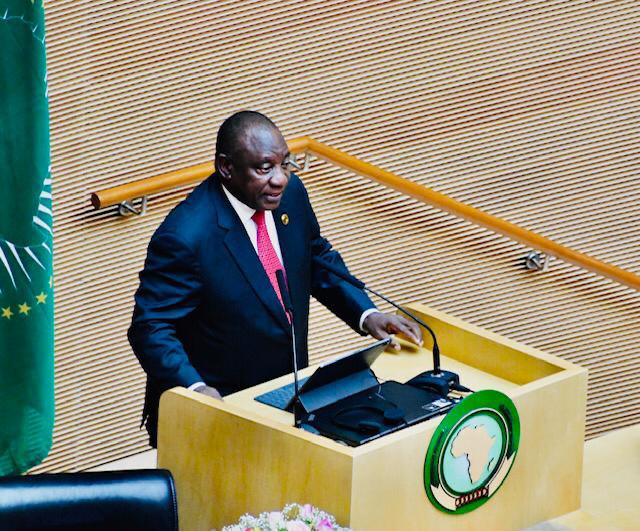 President Cyril Ramaphosa assumed the chairmanship of the African Union over the weekend and was quickly faced with heated opposition from Nigerian diplomats.
Image: GCIS

One of South Africa's top trade negotiators has emerged as the new secretary-general of the African Continental Free Trade Area (AfCFTA) agreement following a bitter political fight with Nigeria at the African Union (AU) summit on Monday.

Amid high political drama, Wamkele Mene, who was also Pretoria's chief negotiator during the AU's discussions on the formulation of the AfCFTA, was on Monday night endorsed by the AU heads of state summit in Addis Ababa as the newly-appointed head of the AfCFTA secretariats.

Mene’s appointment was settled by voting by heads of state following intense debates, after Nigeria attempted to block Mene's appointment by putting up arguments in favour of their preferred candidate, Cecilia Akintomide, a banker from their country.

On Sunday and Monday, Nigeria argued for the appointment of Akintomide, even though she only emerged as the third-ranked candidate after a competency-based selection process conducted by the AU Commission. Mene was number one, followed by a competitor from the DRC.

The South African delegation at the African Union was on Monday embroiled in intense lobbying of other countries to support a former department of ...
News
1 year ago

Diplomats at the summit said the matter sparked a passionate debate. They said after two days of discussions on the issue, it took seven rounds of voting for SA to secure the two-thirds majority it needed for Mene’s appointment to go through.

Mene will now be in charge of the day-to-day operations of the newly created continental trade body, which will oversee the implementation of a tariff-free trade regime.

AfCFTA will be headquartered in the Ghanaian capital of Accra and was expected to be fully operational by end of March.

The matter once more laid bare the political tensions that refuse to go away between Pretoria and Abuja.

Insiders described how, when the matter was tabled at the AU hours after President Cyril Ramaphosa took his seat as chairperson on Sunday, Nigeria “went for the jugular”, arguing that their candidate should hold the position.

Sources said the Nigerians argued that Akintomide's appointment would be a move to boost women empowerment, a key focus of Ramaphosa’s acceptance speech on Sunday as this year's chair of the AU.

The ANC has come up with a list of five priorities for President Cyril Ramaphosa’s tenure as AU chair.
Politics
1 year ago

The source said Nigeria did not invoke women empowerment for any of the other positions and “used the argument to suit their agenda”.

Another source with intimate knowledge of the discussion said it was an attempt by West Africa to flex its muscles. “It was argued that how does Nigeria want the position when they are yet to ratify the agreement and signed it much later than other countries?” the source said.

It was also argued that West Africa was already hosting the offices of the AfCFTA, with Ghana the host country.

The Sunday Times reported on Sunday that Nigeria has also been accused of politicising a decision that "should be settled on the basis of competence”.

The tensions between SA and Nigeria first surfaced at a meeting of ministers on Friday, when they could not agree on a candidate. They referred the matter to the heads of state summit, where it was hoped it would be resolved amicably.

However, the summit was forced to abandon its usual practice of settling matters by consensus and went into a vote.

President Cyril Ramaphosa is to place bulk infrastructure development across the continent at the centre of his year-long reign as chairperson of the ...
Politics
1 year ago

A mysterious illness has claimed the lives of 15 people in Nigeria, according to the West African country’s government.
News
1 year ago

Nigeria has launched new regulations covering gas transportation which it hopes will expand use of the fuel and encourage private investment in ...
News
1 year ago