Ramaphosa on gender-based violence: 'Their killers thought they could silence them but we will speak for them' 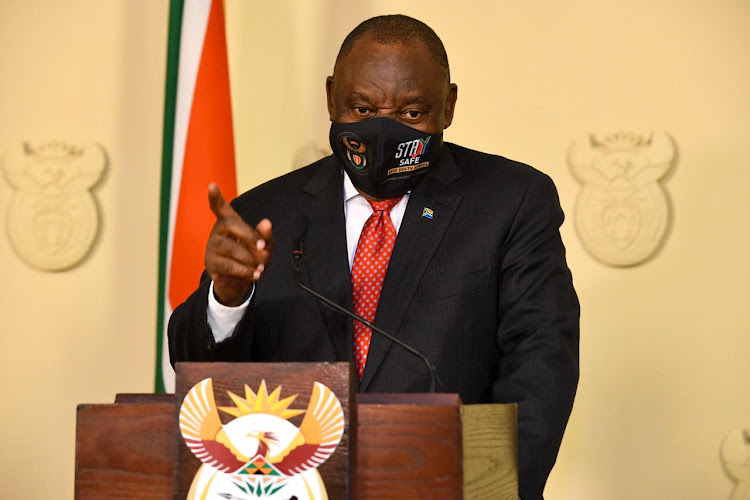 President Cyril Ramaphosa described the crimes committed against women and children as appalling in an address to the nation on Wednesday evening.
Image: Jairus Mmutle/GCIS

SA finds itself in the midst of two devastating epidemics: the novel coronavirus — and the scourge of gender-based violence that has seen a number of women brutally killed over the past few weeks.

This is according to President Cyril Ramaphosa who described the crimes committed against women and children as appalling in an address to the nation on Wednesday evening.

It was nothing less than a war being waged against women and children, Ramaphosa added.

He said the perpetrators of violence against women and children should receive sentences that fit the horrific crimes they commit.

“It is with the heaviest of hearts that I stand before the women and girls of South Africa this evening to talk about another pandemic that is raging in our country — the killing of women and children by the men of our country.

“As a man, as a husband and as a father, I am appalled at what is no less than a war being waged against the women and children of our country,” he said.

President Cyril Ramaphosa on June 17 2020 announced the easing of restrictions on things such as restaurants for sit-down meals, accredited and licensed accommodation, conferences and meetings for business purposes, cinemas and theatres. Ramaphosa said a date for the commencement of these eased restrictions was yet to be announced.

IN FULL | Why cabinet decided to allow restaurants, casinos, hairdressers to open

The president said violence was being unleashed on women and children with a brutality that defies comprehension at a time when the pandemic had left many feeling vulnerable and uncertain.

“These rapists and killers walk among us. They are in our communities. They are our fathers, our brothers, our sons and our friends; violent men with utterly no regard for the sanctity of human life,” he said.

Ramaphosa noted that over the past few weeks no fewer than 21 women and children have been murdered.

“Their killers thought they could silence them,” he said.

“But we will not forget them and we will speak for them where they cannot.”

He named some of the young women who were brutally killed over the past few days.

The family of heavily pregnant Tshegofatso Pule is preparing to hear of the horrific manner in which she and her unborn baby girl were killed.
News
2 years ago

“We will speak for the innocent souls of Tshegofatso Pule’s unborn daughter who had already been given a name, six-year-old Raynecia Kotjie and the six-year-old child found dead in the veld in KwaZulu-Natal.

“They are not just statistics. They have names and they had families and friends. This evening, our thoughts and prayers are with them,” said Ramaphosa.

He commended the police for “their excellent work” in arresting almost all of the alleged perpetrators. Police have generally been criticised of failing victims of gender-based violence and their families.

Ramaphosa said he had “the utmost confidence” that as the suspects made bail applications this week, the courts would send the strongest of signals that such violence had no place in society.

Brakpan man arrested for murder of his mother remanded in custody

The Brakpan man accused of killing his 79-year-old mother and shoving her body into a drum of cement has been remanded in custody after his bail ...
News
2 years ago

The president said he announced an emergency response plan in parliament last September to combat gender-based violence and femicide which included R1.6bn in government funding.

“We now have a national strategic plan to guide our country’s national effort against gender-based violence.”

He said during the lockdown period they had ensured that survivors of gender-based violence had access to support and services, including the GBV hotline, shelters and centres providing support to victims of sexual violence.

Ramaphosa also mentioned the upgrading of sexual offences courts, thousands of evidence collection kits that have been distributed regularly to police stations and survivor friendly rooms at police stations as part of the fight against GBV.

Ramaphosa urged MPs to process legislative amendments that he said have been prepared around, among other things, minimum sentencing in cases of gender-based violence, bail conditions for suspects, and greater protection for women who are victims of intimate partner violence without delay.

Devastated loved ones gathered on Wednesday to give a heartfelt send-off to 36-year-old Sibongiseni Gabada, who was found murdered and stuffed into ...
News
2 years ago

A community member who saw the body of Tshegofatso Pule described it as “gruesome” and something that hurt him deeply as a father.
News
2 years ago