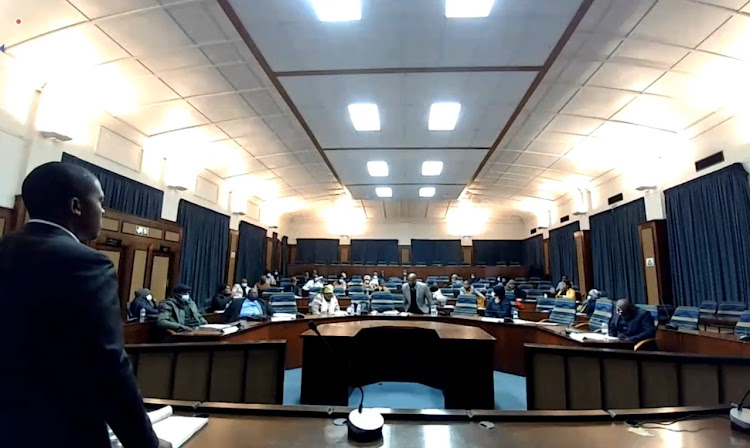 Ousted Nelson Mandela Bay mayor Mongameli Bobani could be back in the role within days if a motion to have him reinstated is passed.

The motion was tabled by ANC councillor Lunga Nombexeza and seconded by United Front councillor Mkhuseli Mtsila, during a confidential section of the council meeting on Monday, reports HeraldLIVE.

Members of the media were removed from the virtual viewing of the confidential debate that followed, but a reporter was allowed back in near the end of the discussion.

The motion recommended that the decision to remove UDM councillor Bobani in December as mayor be rescinded.

Speaking during the meeting, Nombexeza said Bobani should be reinstated.

“The mayor of the Nelson Mandela Bay municipality is and remains Bobani,” Nombexeza said.

Bobani was voted out of the mayoral seat through a motion of no confidence during a council meeting on December 5.

The parties that voted for his removal were the  ANC, DA, ACDP, COPE, AIC and Patriotic Alliance.

The EFF and United Front abstained from voting.

After Nombexeza tabled his motion, ACDP councillor Lance Grootboom was heard cautioning councillors that someone could not be reinstated after being removed through a motion of no confidence.

“We’re heading down a dangerous path and you are going to set a bad precedent,” he said, adding the motion was “incompetent”.

PA councillor Marlon Daniels said the National Treasury had sent the city a letter complaining about the vacancy of the mayor.

“It is important for us to make sure that we fill that vacancy without any delay.

“It is also important for us to be responsible for doing it,” he said.

“I know it’s going to be reckless to rescind the decision.

“The best way is to vote a person in instead of running the risk of it being found irregular.”

Council speaker Buyelwa Mafaya then agreed that the decision to rescind Bobani’s removal would be decided at the next council meeting, to be scheduled in seven days.

At the meeting on Monday, the council agreed to lower the proposed tariff hikes for property rates, water, sanitation and refuse as the integrated development plan and the budget for the 2020/2021 financial year was passed by 62 councillors.

During the tabling of the draft budget on June 15, the municipality proposed tariff hikes of 8% for water, sanitation and refuse, 6.22% for electricity and 8.5% for property rates.

However, the increase in property rates, water, sanitation and refuse will now only be 6% — offering a small reprieve for cash-strapped residents.

The electricity increase stays the same.

The smaller tariff increases will leave the municipality short of R80m, according to a report by interim mayor Thsonono Buyeye.

The report does not state how this fiscal hole will be filled.

The DA councillors left the meeting shortly before the budget was approved.

DA councillor Nqaba Bhanga said later: “Once the meeting got under way, it was made clear that there would be no opportunity for the DA or other parties to interrogate and debate the budget.”

He said those who attended the meeting virtually were simply counted as being in favour of the budget, including the media.

“We could not, in good conscience, add credibility to their blatantly lawless behaviour.”

After the DA left, some ANC councillors defied instructions from the party’s provincial bosses and the regional task team when they agreed that housing director Mvuleni Mapu be appointed as the city’s acting city manager.

ANC provincial secretary Lulama Ngcukayitobi had instructed the party’s caucus in the city to oppose the removal of Noxolo Nqwazi as acting city manager in June.

He said the decision by Buyeye to replace Nqwazi with Mapu was illegal.

However, Mafaya said 31 councillors voted in favour of Mapu taking up the post while 22 voted against it.

She said other councillors abstained.

This is backdated to when he took over from sports, recreation, arts, and culture boss Nqwazi on June 8.

Grootboom had said before his official appointment that he would be concerned if Mapu was appointed.

“Changing this will bring instability to the city,” Grootboom said.

“This could have a huge effect on the municipality.

“We have more senior people in this city and I don’t see why we can’t extend her [Nqwazi’s] tenure.”

The meeting got off to a rocky start when DA councillors were barred from entering the Feather Market Hall along with municipal CFO Selwyn Thys.

There were several technical hitches during the meeting, including a constant loss of sound, and councillors walking in and out of their venues.

This led to Mafaya venting her frustration numerous times.

During the debate on the budget, ANC councillor Rory Riordan said the party planned to make amendments to the budget when it was adjusted.

“The city needs more economic projects. The economy is in dire straits,” he said.

“There is no job growth. The city needs catalytic projects.”

Daniels said: “Nothing stops a bullet like a job.”

He said no economic development was taking place in the city.

“We have to make sure economic development is recognised,” he said, referring to the proposed Tower of Light project and a life-size sculpture of former president Nelson Mandela at Shark Rock Pier.

Trollip takes aim at Holomisa and axed Bobani: 'They are both playing a desperate game'

Screening protocols are falling through the cracks at Livingstone Hospital, common areas are not being regularly sanitised and staff are not wearing ...
News
1 year ago

Deputy auditor-general Tsakani Maluleke has decried the failure of many South African municipalities to account for public finances entrusted to them ...
Politics
1 year ago