'They deserve every voetsek hurled their way': SA reacts to ANC jet to Zimbabwe controversy 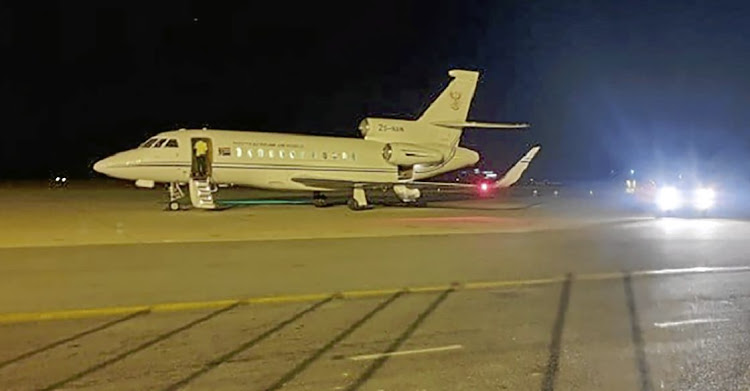 The ANC's latest controversy, involving its delegation taking a taxpayer-funded junket in an SA Air Force jet to Harare and 'ignoring level 2 lockdown regulations', has been met with mixed reactions.

The ANC has been accused of abusing state resources after its delegation landed in Zimbabwe last week on flight funded by taxpayers for a meeting with Zanu-PF.

The delegation led by party secretary-general Ace Magashule met officials from the governing Zanu-PF after allegations of human rights violations during the coronavirus pandemic and lockdown.

TimesLIVE reported the delegation was given a lift by defence minister Nosiviwe Mapisa-Nqakula, who had permission to travel to Zimbabwe to meet her counterpart to discuss defence-related matters in the region after a recent Southern African Development Community (SADC) summit.

President Cyril Ramaphosa gave Mapisa-Nqakula 48 hours to compile a report about the incident.

In a statement issued by the presidency, Ramaphosa said the incident put both the ANC and the government in the spotlight.

“In the interest of good governance and the prudent and ethical use of state assets, the president has directed the minister to provide a report within 48 hours that will set out the circumstances around the flight and the passenger list.”

The president acknowledged the outrage over the incident, saying it is an “indication of the nation’s vigilance against allegations of improper deployment of public resources”.

President Cyril Ramaphosa is under fire over the use of an SANDF jet to ferry the ANC delegation led by party secretary-general Ace Magashule to ...
Politics
1 year ago

The SA National Defence Force (SANDF) has defended the decision to transport members of the ANC.

SANDF spokesperson Siphiwe Dlamini said there was nothing inappropriate about the travel arrangements.

“[Mapisa-Nqakula] was travelling to Zimbabwe to meet her counterpart in preparation for a SADC Troika meeting and the UN reconfiguration of the Force Intervention, which comprises troops from the SADC region.

“The ANC delegation was going to deal with issues that are having a direct impact on SA. This is not a common occurrence and has never happened before,” said Dlamini.

Freedom Front Plus leader Pieter Groenewald says he will lodge a formal complaint with the office of the public protector after defence minister ...
Politics
1 year ago

Sunday Times reported that the department of home affairs would investigate whether the passengers who flew to Harare breached national lockdown rules.

Home affairs minister Aaron Motsoaledi instructed his officials to conduct the investigation on Thursday, a day after the ANC delegation landed back at Waterkloof Air Force Base in Pretoria.

According to reports, the meeting with Zimbabwe’s defence, security and war veterans minister, Oppah Muchinguri-Kashiri, lasted less than an hour.

The ANC denied the junket was an abuse of taxpayer funds, claiming the visit was in national interests.

It is believed two members of the delegation are in self-quarantine after the trip.

On social media, users weighed in on the controversy.

Here is a snapshot of what many had to say.

So Pres Ramaphosa sends an ANC delegation to Zimbabwe in an SANDF jet. So if the Guptas could land on Waterkloof airport by presidential decree, so what’s new?

I did not know SANDF jet has become a public taxi. I learn it transported ANC civilians to Zimbabwe

We regret the use of the DoD Jet to fly Comrades to a meeting with ZANUPF to discuss the urgent situation in Zimbabwe.

The ANC will refund government a fair&reasonable portion of the flight.

“our actions were wrong but our intentions were noble”

I have no doubt the “high level” ANC delegation in Zimbabwe will end in nothing but vibes & wasted jet fuel.

President Cyril Ramaphosa has directed defence and military veterans minister Nosiviwe Mapisa-Nqakula to furnish him, within 48 hours, with a ...
Politics
1 year ago

President Cyril Ramaphosa is under fire over the use of an SANDF jet to ferry the ANC delegation led by party secretary-general Ace Magashule to ...
Politics
1 year ago