Cape Town refugee crisis far from over amid government squabbles 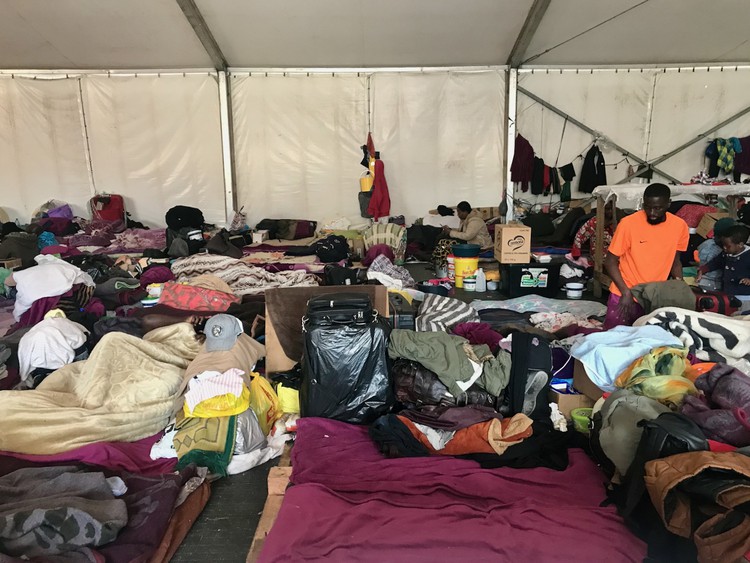 The refugee camp in Bellville. Males older than 18 sleep in their own marquee. They may visit the female marquee after 9am.
Image: Tariro Washinyira/GroundUp

The government's plans to deal with foreign nationals who occupied Greenmarket Square in Cape Town a year ago remains unclear as the city and the department of home affairs squabble, accusing each other of shrugging off their responsibilities in the matter.

Parliament's home affairs portfolio committee in March gave the two entities 30 days to integrate the hundreds of refugees and asylum seekers back into the local communities they were residing in before their occupation of the city centre protesting against “xenophobia”. Those who refused to be reintegrated should be sent back to their countries of origin, the committee said.

This was just days before President Cyril Ramaphosa declared the state of disaster and the imposition of the lockdown.

As xenophobia in SA simmers, officials are targeting foreigners and children are being attacked by classmates, a new report reveals.
News
9 months ago

The two groups of refugees and asylum seekers were forcefully removed by the police from the Central Methodist Church and outside the Cape Town central police station at the beginning of the lockdown in April and taken to two temporary shelters outside the Wingfield Military Base in Goodwood and in Paint City, Bellville. The shelters were established under the Covid-19 regulations.

On Tuesday, during a meeting to report back to the committee, the city claimed it had fulfilled its responsibility to the refugees as much as it could, saying the department of home affairs was ultimately responsible for what happened to refugees.

“It is the city's view that refugees are managed in terms of, among others, the Refugee Act. Refugees and asylum seekers do not fall under the constitutional schedules which deal with the mandate of local government,” said Cape Town's Antoinette Markram.

She said refugees and asylum seekers remain the responsibility of the department of home affairs.

The city’s limited participation at Wingfield, including the ongoing cost it is incurring in relation to the marquee tents and amenities, was premised on a commitment made by home affairs minister Aaron Motsoaledi, that people housed in the shelter facilities at Wingfield in terms of the Disaster Management Act Covid-19 regulations would after the lockdown, either voluntarily reintegrate by returning to the communities they were residing in or the department would repatriate them to their country of origin, she said.

Corruption is rife at Refugee Reception Offices around the country, despite laws aimed at combating it, according to a study by Lawyers for Human ...
News
10 months ago

Mayoral committee member for safety and security, JP Smith, added that the city had taken all the steps required in terms of the initial regulations relating to shelter and that it was still incurring millions of rand of costs relating to that function.

“We understand our constitutional role, we are happy to assist the department of home affairs as the lead agency in delivering on the outcomes they have to,” he said. “Our core point of departure for participating in any of the above activities was one in relation to the lockdown regulations which called on all spheres of state to assist with the start-up — which we have done,” he added.

He disputed much of what Motsoaledi was saying in the meeting. Smith issued a warning that attacking the city and its office bearers was unhelpful and undermined the working relationship.

He said they were willing to assist with the “exit strategy” which he referred to as “still a challenge” but because the city was not the lead agency, the national government should play its constitutional role, he said. He argued that refugees have the same access to services as all South African citizens and Capetonians if they are in the country legally.

“But if one is asking for special access to services, that category of special access and in relation to their (status) as refugees, that will have to come from the department of home affairs,” he said, charging that there was no legal basis for a city to provide accommodation or housing for refugees or asylum seekers.

Motsoaledi threw the ball to the UN commission for refugees, saying it ought to advise SA how to deal with the matter, especially as the people involved were not co-operating.

“They refuse integration. They are demanding to be resettled in Canada, not the US but Canada. They don't want to be voluntarily repatriated, my question is what do we do?” he said.

“What option is left for us. It's not written in any law of the country, it's never happened before,” lamented Motsoaledi who was leading his department's appearance before the home affairs portfolio committee.

Taking on the city, Motsoaledi said the temporary accommodation of refugees and asylum seekers at the two sites in Cape Town was going to be in terms of the disaster regulations.

“The city keeps on saying it's not their mandate, I want to remind them that the Disaster Management Act, that law falls under Cogta. They are the custodians of disaster regulations.”

He said SA deliberately chose not to have refugee camps, saying that foreigners should integrate with the rest of society ... “and when they integrate with society, they will need accommodation, water, sanitation and all sorts of things and those things cannot be provided by home affairs simply on the basis that they are refugees or asylum seekers”.

Cape Town mayor Dan Plato says he is disappointed by his national government counterparts after a public spat over the relocation of refugees in the ...
Politics
1 year ago

The SA Human Rights Commission told MPs that the three biggest challenges at the two sites were access control as both sites are not controlled, health assessments of the two populations and the question around their documentation were required.

The commission's Ghalib Galant revealed that the numbers of people living in the two camps had doubled since.

“In Wingfield, which is military land owned the department of public works, we saw a movement from about 400 people who were originally moved to now about 700 or 800 people,” said Galant.

He said while 900 people were moved from the church to Paint City in Bellville, the number of people at the site has almost doubled.

Galant said the camps need to be stabilised, something that government has failed to do since moving people to these sites. “And much of that has to be placed at the foot of the intergovernmental squabbles over who has responsibility for what,” he said.

He said assessment and verification both of health and documentation was also required but again because of the lack of mandate and perhaps because of priorities, that had also “by and large” not been done.

Galant said the population at Wingfield was split with about half interested in being reintegrated into the local communities but that conversation had not begun formally due to the delays at the departmental level.

He described the Bellville site as “more belligerent” of the two saying the people there were the most opposed to a local solution or a South African government intervention.

The committee resolved to conduct on-site visits at the two shelters before deciding on the way forward.

A 100-year-old oil painting was destroyed and the organ damaged during refugees' five-month stay in the Cape Town Central Methodist Mission.
News
1 year ago

The national government and Cape Town authorities are having a public spat over the housing arrangements of foreigners who recently occupied the ...
Politics
1 year ago

Throngs of refugees and children were stilling sitting on pavements in the Cape Town CBD by noon on Tuesday – five days into the lockdown.
News
1 year ago