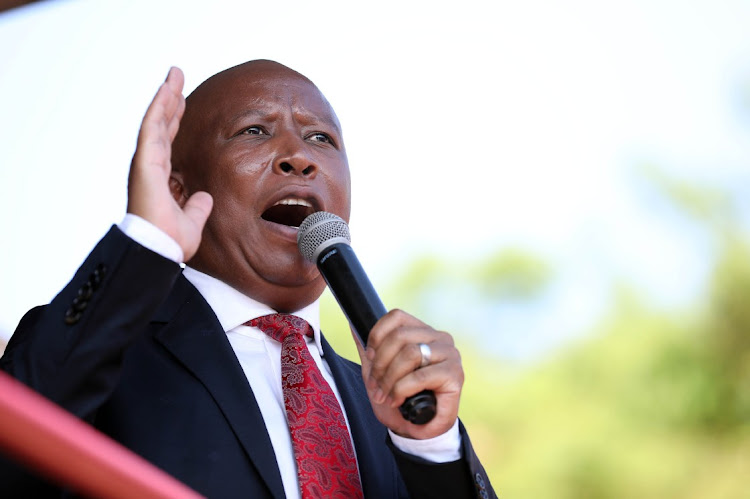 EFF leader Julius Malema told EFF supporters at a community meeting in Mohokarke, Free State on Sunday that racism will soon be a thing of the past in SA.

Malema's address came after the red berets protested last week in Brackenfell in Cape Town against alleged racism. The EFF returned to the area for the third time on Friday after a violent confrontation earlier this month.

Here are five quotes from his address:

Racism will fall in SA

“Racism in SA is going to fall whether they like it or not. It is just a matter of time. We're going to go after racists everywhere. There will not be a home for racists. They will on their own take a flight or a ship out of SA because they will no longer feel comfortable.”

“The EFF wants to restore life back into the black bodies. That's why they shoot us with ease because there is no life in black bodies. They respect life in Europe. They don't use stun grenades and teargas in Europe. They don't use violence against protesters in Europe. Why? Because there is life in the body of white people in Europe, but when they come here, they use rubber bullets, stun grenades and teargas.”

The city of Cape Town gave permission for 100 protesters to demonstrate in Brackenfell, but hundreds arrived.
News
1 year ago

A white man was assaulted by dozens of EFF members on Friday after he moved forward through a crowd to address the party's secretary-general, ...
News
1 year ago

“This ward belongs to us. This ward belongs to the EFF. This ward will be won by the EFF in 2021 whether they like it or not. This is our ward. So, fighters stop fighting each other like you are [President Cyril] Ramaphosa or [ANC secretary-general] Ace [Magashule]. Here, we fight for the needs of our people.”

No sex for jobs in the EFF

“In the EFF we work together. Here we want to know whether you passed well to give you a bursary, and we look at your CV to employ you. We don't give our posts for sexual favours.”

The EFF will continue its demonstrations outside the school on Friday morning.
News
1 year ago