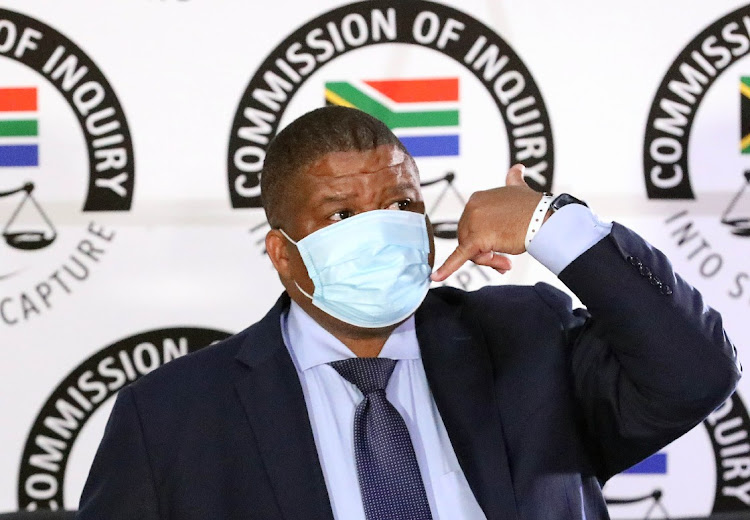 A state security agency (SSA) official testifying at the Zondo commission on Thursday detailed the extent to which former intelligence minister David Mahlobo was involved in operational matters.

The witness, testifying under the pseudonym Steven, said Mahlobo was involved in handling assets and signing off on operations.

Steven told the inquiry he had personal knowledge of Mahlobo's overreach because the two of them were close and he often visited the minister socially.

Mahlobo, he said, had no business being involved in operational matters as his mandate was limited only to executive oversight.

But the minister's overreach, said Steven, became apparent after the signal jamming episode in parliament during the state of the nation address, an incident the SA Editors Forum (Sanef) approached the high court about.

Steven says it was after the Sanef court challenge that he was summoned to Mahlobo's official residence in Pretoria. Upon his arrival, Mahlobo introduced him to two individuals who he claimed were high court judges in Gauteng and would be used to influence their colleague at the Western Cape High Court, where the case was enrolled.

Another incident involved community unrest in Eersterust, where then president Jacob Zuma and Mahlobo visited to intervene.

At the event, said Steven, Mahlobo told him he was not happy with information supplied by operatives on the ground and would be taking over the running of the operation himself.

After the meeting, Mahlobo directed Steven to source R400,000 to “pat someone” who had been identified as an asset in the area. The money was given and meant to be handed over to the asset. Steven organised his colleague to provide “cover” for the person dropping off the money.

“Nothing happened there, there was no-one, we never saw any movement. I called this person saying we were there, nothing happened, he just laughed at me,” said Steven.

Another incident involved a tip-off that there was a foreign national plotting sabotage at Phelindaba in Tshwane. The agency deployed surveillance, the police and the military were deployed for two weeks.

Steven says no threat was identified, at which point he contacted Mahlobo, who told him the sabotage had already happened.

“I said it cannot be because we have been here throughout with our forces deploying huge amount of resources for nothing.

“Then I called Frank [an SSA official] and asked who is this asset and Frank said this asset belongs to the minister. He then forwarded me a photo of an old man surrounded by kids. When I asked, he laughed, and said this is the person who gave information to minister Mahlobo, saying something was going to happen in Phelindaba.”

Steven said Mahlobo instructed him that the old man in the photo should be paid R3m  from SSA coffers.

A revolt was brewing from senior members of the SSA, who confronted then SSA director-general Sonto Kudjoe to complain about the operation against them.

Kudjoe had not approved the operation and summoned Mahlobo, who upon being confronted, threatened the SSA officials.

“Minister Mahlobo lost his cool and said to us, who do we think we are,” said Steven.

The former Eskom boss led his own evidence, questioned himself and provided the answers on the controversial replacement of the Glencore-owned ...
Politics
1 year ago

The ANC was on Friday yet again exposed for blurring the lines between party and the state.
Politics
1 year ago

Inspector-general of intelligence Isaac Dintwe believes that a “parallel vetting structure” was established by the State Security Agency (SSA) to ...
Politics
1 year ago