'Comrade Geoff was a peaceful person. He would not like to see Joburg burning like it is now. Actually, if he was still alive he would be on the ground engaging with our communities,' a friend said during Makhubo's memorial service. 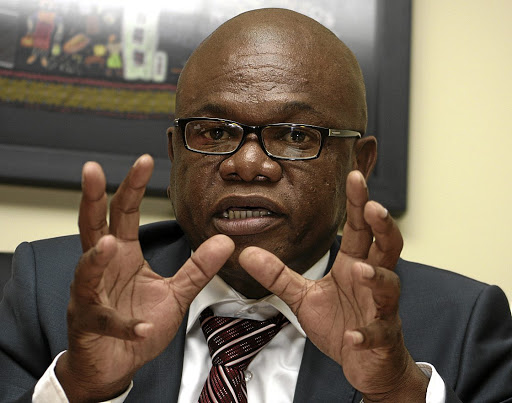 Late Johannesburg mayor Geoff Makhubo was forever jovial, a leader rooted in his people, exemplary in humility and with a legendary sense of humour.

This is according to suspended presidential spokesperson Khusela Diko, who was speaking during a virtual memorial service for Makhubo on Tuesday. Makhubo succumbed to Covid-19 complications last week.

Friends and family remembered him as a peaceful person who would not have taken kindly to the deadly protests and looting of businesses taking place in Gauteng and KwaZulu-Natal.

“Comrade Geoff was a peaceful person. He would not like to see Joburg burning like it is now. Actually, if he was still alive he would be on the ground engaging with our communities.

“Let us ensure that we give comrade Geoff a befitting farewell by ensuring that Joburg, Gauteng and the entire SA is in peace,” said a friend, only identified as Siphiwe.

Another friend said the news of his passing came as a shock and left them deeply broken.

“He was a friend who pumped a lot of positivity into our lives, a friend who was extremely generous to all in many ways,” he said.

“Our comrade Geoff was ever-jovial. He was studious and indeed a disciplined cadre of our movement. It would not be an exaggeration to say that he took me under his wing. He helped me to integrate into the structures of the ANCYL in Johannesburg.

“It was through working with him and many others that I think I truly assimilated the values of service, values of loyalty and abiding love for intellectual rigour and debate because, indeed, wherever comrade Geoff was, those were values that would often be imparted to us. They characterise the engagements that we had,” she said.

Diko said though it was common for male counterparts to get praised for doing a bare minimum, advocating for women empowerments, Makhubo did this effortlessly.

“Geoff never considered us young women ... as an afterthought to make up the numbers, but be believed in the capabilities, in the capacity, of every woman that he worked with.

“I've also seen the same determination and fortitude that he advances on his posture to women in the executive that he served in the city, on the boards of the many institutions that he has led, as well as the responsibilities that he has given to women and young women across many endeavours. This inclusive approach to leadership was a hallmark of Comrade Geoff,” said Diko.

He was praised for his role and contribution in building the party in the province. Friends vowed to honour his life and support his family even beyond the bereavement period.

“He believed fundamentally that politics was about people and morality. Most of the time he lead from the back, he was a true child of the ANC, who always shared wisdom and guidance of others before making his views known on a matter.

“He was exemplary in his humility, we've heard many times on these platforms that he had ubuntu. His sense of humour was legendary. He was accessible to all of us, he was always found rooted among the people,” she added.

Johannesburg mayor Geoff Makhubo has been hospitalised with Covid-19, the city said on its official Twitter account.
News
1 year ago

Joburg mayor Moloantoa Geoffrey Makhubo, who died of Covid-19 related complications on Friday, was an often controversial figure who garnered both ...
Politics
1 year ago

Geoff Makhubo: mayor who wanted the best for his metro

The mayor of Johannesburg, Geoff Makhubo, who died on Friday aged 53, was a committed ANC member and a passionate Orlando Pirates fan.
Opinion & Analysis
1 year ago