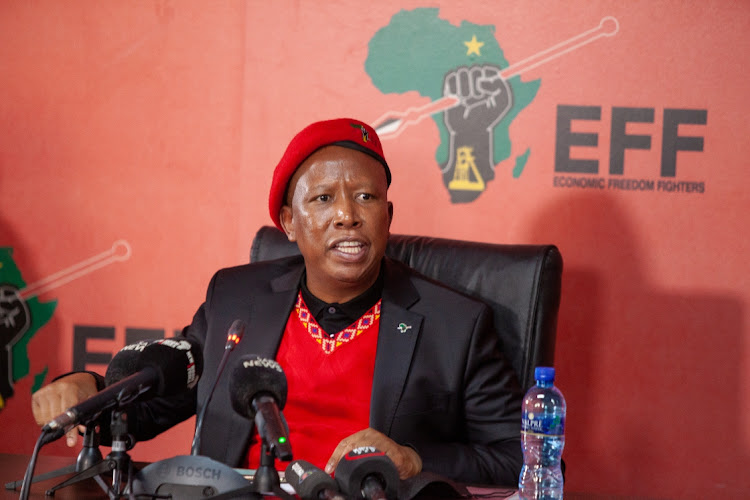 On Monday, the party shared snaps of the houses at an undisclosed location. Malema vowed that the EFF would provide “spacious” houses to all citizens.

“When we say our people must have quality houses, we are speaking of women dignity as many households are women-headed.

“The EFF government will provide such quality, spacious houses to all the people,” he said.

[In Pictures]: CIC @Julius_S_Malema handed over houses to grannies by the EFF.

When we say our people must have quality houses, we are speaking of women dignity as many households are women headed.

The EFF government will provide such quality, spacious houses to all the people pic.twitter.com/MhluAxwAmH

The move drew applause from many on social media, but some questioned whether giving away such “luxury” houses en masse would be practical.

The housing initiative comes weeks after Malema called on the country to help track down a woman who was caught on camera allegedly being detained by police for looting during last month's unrest.

“I'm back, and please help me find our Gogo. Already dispatched the legal team to look for her at the police stations this morning,” he said at the time.

“Which rule of law is this? Which court of law did they approach before they violate his right by suspending his account?” Jim asked.
Politics
10 months ago

During his speech to commemorate the women's march of 1956, Malema said there was no liberation for women if they could not produce their own food, have their own homes and decide to establish a business on their own land.

“Women in SA occupy critical industries in the formal and informal sector, but because it is men who determine the hierarchy of which occupations matter, women remain at the bottom of the labour production food chain,” said Malema.

“Industries dominated by women such as food production, the textile and clothing industry, nursing and teaching are critical to the sustenance of society, but women in these sectors are exploited and underpaid.”

He said the gender pay gap was a form of gender-based violence (GBV).

“GBV in its most brutal form refers to violence against women at an intimate level, but this violence is based on how women are regarded by society,” said Malema.

“The gender wage gap only emphasises that women are not valued in this country. Women in SA are the most productive yet invisible labourers.

“The attitude that women are worth less than men, the position of women in our cultures and religions, and the place women occupy in our economy, is the motivating factor for the brutality and violence they are subjected to.”

The EFF wants tougher laws, including more accountability from the police, to boost the fight against gender-based violence.
Politics
9 months ago

‘Insensitive’ or outspoken? Malema divides SA with criticism of ‘Milkpark’

“We have no prisons in SA, we have correctional services. We correct you and reintegrate you back into society. How will we correct an 80-year-old ...
Politics
9 months ago