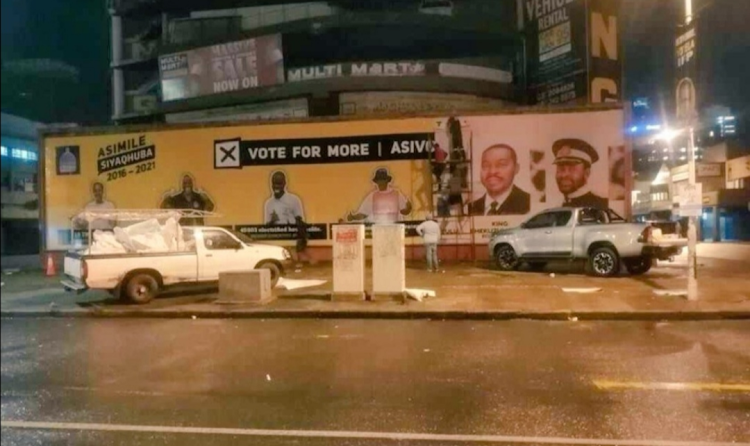 An election banner replacing one of Zulu kings in central Durban has angered royal supporters.
Image: via Twitter

An eThekwini municipality election banner which replaced one depicting Zulu kings has got royal supporters hot under the collar.

Many took to social media on Monday to express their anger at the municipality's decision to put up the banner at the Nicol Square garage, which greets motorists as they enter the central business district.

The banner encourages people to vote in the upcoming municipal elections.

One Twitter user said: “This is not going to go down well with the royal house and the traditional prime minister of the Zulu nation.”

Another Twitter user accused the ANC of “literally splitting our Zulu kingdom by replacing our kings with election banners. Shame on you!”

POLL | Will the ANC win all metros?

Will former finance minister Tito Mboweni's prediction come true, or will the ruling party be lucky to win even one metro?
Politics
3 months ago

The city said in a statement that it “noted the mixed views related to a banner highlighting service delivery achievements at Nicol Square garage in the Durban CBD, a space that previously had a banner depicting the Zulu kings.

“The municipality reiterates its respect for the Zulu royal family and for the institution of ubukhosi, which is why we celebrated Zulu kings through the previous banner and educated the public about Zulu kings.”

The city said the kings banner was not “a monument to Zulu kings or a statue”.

A big mural displaying the previous Kings of the Zulu Kingdom has been replaced with an ANC banner in eThekwini.

This is not going to go down well with the Royal house and the traditional Prime Minister of the Zulu nation.

The city said the banner of the kings occupied the space for more than a year, “which may have caused some members of the public to think that the banner would be there permanently, but advertising banners get changed from time to time.

“Before amakhosi that space had a banner of previous presidents of the ANC. The banner was eventually replaced by amakhosi. That replacement was in no way interpreted as disrespect to the ruling party.

“Similarly, the replacement of amakhosi with service delivery achievements is not meant to be disrespectful in any way.

“The current banner also has a defined lifespan and will be replaced by something else.”

The municipality said it had a responsibility to promote democratic rule by encouraging the public to vote.

“Part of that process includes highlighting service delivery achievements, as that helps to answer the question: why should I vote? — a question often asked by residents who are ambivalent about voting.”

It appealed to the public “not to use this banner to score political points”.

The ANC in KwaZulu-Natal said it was in “disbelief” about “the desperate attempts to score cheap political points by some members of the opposition who have decided to make unnecessary noise about the banner.”

It said the municipality had a responsibility to encourage people to vote on November 1.

“Once the elections are over, there are plans to continue putting other advertisements, such as putting up the faces of all the mayors of eThekwini since the establishment of local government.”

“It defies all logic that some IFP stooges, including its leader and Zululand district municipality mayor, councillor Thulasizwe Buthelezi, would resort to taking to social media to blame the ANC after the city put up its election banner.

“We view their noise as a desperate attempt to derail our campaign to win all the municipalities in the election.”

The party said the IFP “are no custodians of the monarchy. Just like us, they are also the subjects of the Zulu monarchy and should behave as such.”

The IFP has accused the ANC of undermining the Zulu monarchy.
Politics
3 months ago

Despicable is how ANC president Cyril Ramaphosa described the DA’s local government election campaign posters in Phoenix, which he said sought to ...
Politics
3 months ago

TimesLIVE readers have expressed different opinions about the DA's decision to remove its controversial election campaign posters in Phoenix, Durban.
Politics
3 months ago