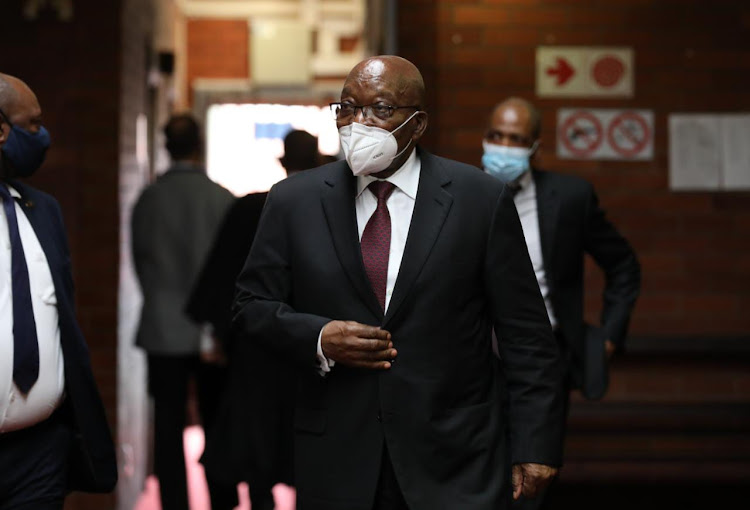 Former president Jacob Zuma at the Pietermaritzburg high court on Tuesday ahead of judgment on his application to have state prosecutor Billy Downer removed from his fraud and corruption trial.
Image: Sandile Ndlovu

Former president Jacob Zuma has lost his bid to have lead prosecutor advocate Billy Downer removed from his corruption trial.

Pietermaritzburg high court judge Piet Koen on Tuesday said Zuma’s application — that Downer had no title to prosecute in the matter because he was biased — was incorrect in both law and fact.

The matter is standing down for the representatives of the state, Zuma and his co-accused, French arms company Thales, to arrange dates for the trial.

The judge gave a 20-minute summary of his 187-page written judgment.

Zuma based his application on a section in the Criminal Procedure Act (CPA) which deals with a prosecutor's “title to prosecute”.

He raised 14 points which, his legal team argued, proved that Downer — and in fact any official from the National Prosecuting Authority — could not prosecute him because they were not impartial and he would not get a fair trial.

Koen said, however, that Zuma should have brought a “substantive application” because that section of the CPA only applied to the legalities of “title” — in other words was the prosecutor properly appointed.

He said a prosecutor could not be removed under that section, simply because of an apprehension of bias.

He further said that any concerns regarding bias or impartiality which could result in an unfair trial would be dealt with by the judge hearing the trial itself.

He said these issues had already been pronounced upon by the Supreme Court of Appeal and he was bound by the ruling of the higher court “even if I disagreed with it, which I don’t”.

Referring to the 14 points, Koen said most were based on “speculation, suspicion or hearsay evidence” and even if he was wrong in his interpretation of the issue of “title to prosecute”, at best some might qualify as possible irregularities, but  they were not such to require Downer to be removed as the  prosecutor.

Spokesperson for the JG Zuma Foundation Mzwanele Manyi told Newzroom Afrika "the judgment is one of the most irrational pronouncements I have ever ...
News
9 months ago

With regards to one of the issues raised belatedly by Zuma — that the state had unlawfully attempted to physically examine him while he was in hospital, the judge said he wished to “clarify” his order on this matter.

“I directed then that the state may appoint a medical practitioner of its choice to give evidence as to the fitness of Mr Zuma to attend court and stand trial.

“An argument was advanced (by Zuma) that this order was linked to a medical report by his doctors being first produced.

“I have clarified that the order was unconditional and not qualified and he was required to submit himself for that medical examination,” Koen said.

He dismissed the special plea, directed that the trial proceed and clarified his previous order regarding the physical examination.

There was a small gathering of people and a high police presence outside the court ahead of Zuma's big day in court.

Zuma believed that if his application to remove Downer was successful, he should be acquitted and he would be a free man.

This comes after Zuma laid criminal charges against the prosecutor for allegedly leaking his medical records. Zuma filed the charges at the Pietermaritzburg police station last week.

Former president Jacob Zuma has lost his bid to have lead prosecutor advocate Billy Downer removed from his corruption trial.
News
9 months ago

"Fact, you can't rescue both President Ramaphosa and the ANC at the same time, one has to go. You choose," said Duduzile Zuma-Sambudla.
Politics
9 months ago

A legal team appointed by the state, which has been given access to former president Jacob Zuma’s medical records, has deemed that he is fit to stand ...
Politics
10 months ago