Not on our watch: DA to intensify fight against Eskom’s 20.5% proposed hike 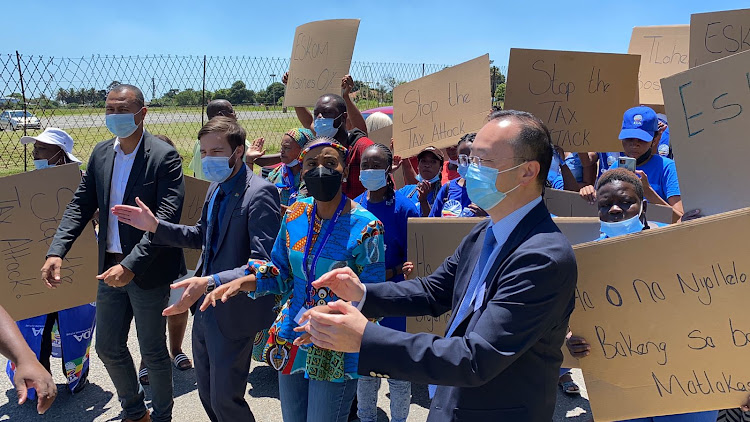 The 20.5% proposed tariff hike by Eskom for 2022/23 is “entirely misinformed” and the DA will do everything possible to stop it going ahead in April.

This is according to Mogale City mayor Tyrone Gray, who has since lodged a formal objection with the National Energy Regulator of SA (Nersa) against the power utility's proposal.

“Nersa must stop behaving like Eskom’s big brother and start thinking of creative ways that we can supply energy to our country and nation for our economy to prosper,” he said.

He was addressing a handful of supporters alongside other DA mayors outside Gallagher Convention Centre in Midrand where the party embarked on a picket as Nersa held public hearings on the matter.

“The Reserve Bank has a mandate to [monitor] inflation targets, so it has to keep inflation between 3% and 6%. Should Eskom be allowed to increase [tariffs] it means the price of bread, fuel and water is going to go up, so we can see that it’s entirely misinformed,” said Gray.

Eskom’s proposed tariff hike of 20.5% for its next financial year, which is set to kick in from April 1, has South Africans united in outrage.
News
5 months ago

Gray accused the government of operating in silos.

“Eskom and Nersa must consider that the Reserve Bank will be forced to pitch up interest rates to keep inflation down and this will mean that our GDP will contract, which means we will have even more unemployment. This increase from Eskom is going to entrench us in poverty,” he said.

“The multiparty government in Joburg rejects the 20% tariff hike. Our people are crying, unemployed, they want jobs, our people don’t need a tariff hike at the moment,” she said.

Instead of hiking prices, the city should look at big businesses and government  departments that owe it money and leave ordinary ratepayers alone, said Phalatse.

“Our ratepayers are complaining, some are thinking of relocating and emigrating because the cost of living is just too high. They feel they are not treated fairly,” she said.

“We believe that when we open up for greater participation by independent power producers, small-scale energy generators, we will begin seeing competition lowering the price for our consumers.”

Phalatse said the city will be hosting an energy indaba in March to which suppliers, innovators, academics and entrepreneurs would be invited to deliberate on the energy crisis and come up with possible solutions.

“We cannot afford to have load-shedding, constant power outages because of areas that don’t have electricity, illegal connections, vandalism of our infrastructure. We need to find solutions collectively and resolve the energy issue in Joburg.

“While we do that, we will be opening up competition. With  more players in the energy space, we believe our people will be well served.”

The DA has launched a petition against the proposed hike, calling on South Africans “to not pay for electricity that they do not get”. It has been signed by 23,815 people so far.

An Eskom security contractor has died after he and his colleagues came under attack in Soweto last week.
News
5 months ago