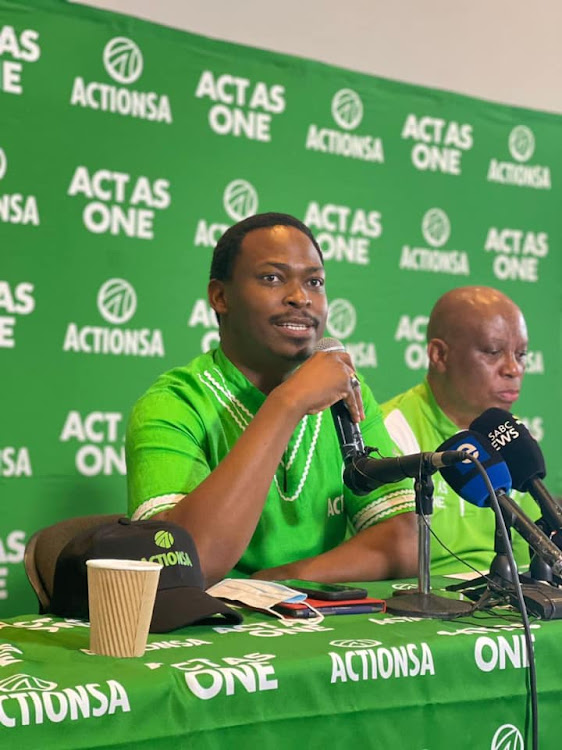 He was announced as a member of the party’s highest decision-making body, its Senate, on Monday, a month after his sudden resignation from the DA, which he served for more than a decade.

Baloyi is already touted to be the party’s Gauteng premier candidate when the country heads to the 2024 national elections.

The 35-year-old insists there was nothing untoward about his departure and that ActionSA appealed to him mostly because of a lack of “baggage”.

“It was time for me to leave and to pursue a political activity elsewhere. It has nothing to do with anything bad happening in the DA.

“The DA as a standing party, or any political party that has been standing for the longest of time, has baggage, trust issues with voters, people leaving and coming, people being uncertain, and dropping a voting base as well.

"I directly hold the current tripartite alliance government [responsible] for allowing this criminality with impunity for a long time, including ...
Politics
6 months ago

“Those are things that are happening and people are reflecting and this is a new political entity. It allows someone like me to come in, plug and play really, and be able to contribute immediately,” Baloyi said.

He was speaking to journalists shortly after his membership was made official.

Party leader Herman Mashaba admitted to approaching the “experienced, and ethical” Baloyi as early as 2020, and again in October 2021 when they went for lunch.

Baloyi, however, asked to be allowed to finish his term of office and “make the people of Midvaal proud”, but committed to speaking at a later stage.

At the age of 26 in 2013, Baloyi became the youngest mayor when he took over the Midvaal municipality. Under his leadership, the municipality received seven consecutive clean audits. It was also ranked fifth-best performing municipality in the country.

Though Mashaba has vowed to support Baloyi in his political endeavours, he said he would be subjected to internal party processes like any other member.

“When the time comes, I am definitely going to throw my hat in, there is no ambiguity about whether I’ll stand as a premier candidate or not internally in the process of the party, and absolutely I am going to do that. There is no two ways about it.”

The position is expected to be widely contested by Senate members. Baloyi was confident the best man would win.

“The beauty is that there is an internal party democratic process. I am going to throw my hat in, everyone else is going to do the same and we are going to compete and the best of the best will win and I’ll accept whatever outcome.”

It was not immediately clear what role he would play in the Senate, but Baloyi said he was committed to relegating the ANC to the opposition benches. “I want to unseat the ANC, I want to play a meaningful role in unseating the ANC.”

Speaking about the changes he would like to see in Gauteng, Baloyi cited the importance of being clear about the economy and positioning the economic hub ahead in terms of economies of the future.

But first, running a solid, clean, efficient well-managed government would be the best enabler for economic activity.

“If you are not running a solid government, you can’t do anything else. So for me, it’s to get a stable, transparent and responsive government, which is agile, able to deal with challenges we are having, which gives us a pivot point for us to deal with the issues of the economy, infrastructure, service delivery.”

While Baloyi is joining politics on a full-time basis, he will also be involved in consulting.

“It’s a space I know, all I need is a brain and a pen. Governance is what I know and advising people on how to navigate similar spaces.

“I had serious offers on the table, but I am a patient South African. But also it’s important for me to be economically active in ways that I can control what I do, so I am not reliant on the party only, so I can actually drive and retain my agency,” he said.

Baloyi would not be drawn on commenting about possible reasons for black leaders leaving the DA and seemingly joining ActionSA.

“I don’t know why other people left, I am leaving because I am starting a new political journey ... what do they say about greener pastures?” he quipped.

Sisulu signs up for a magical mystery tour promising the presidency

Ramaphosa must fire Sisulu and demonstrate to the rest of the ANC that being a victim may have worked for the Nkandla crooner but will not work for ...
Opinion & Analysis
6 months ago

The City of Tshwane has elected Cope councillor Murunwa Makwarela to take over the reins as speaker of the capital city's council.
Politics
6 months ago