Motion of no confidence in Ramaphosa hits another snag, put on hold 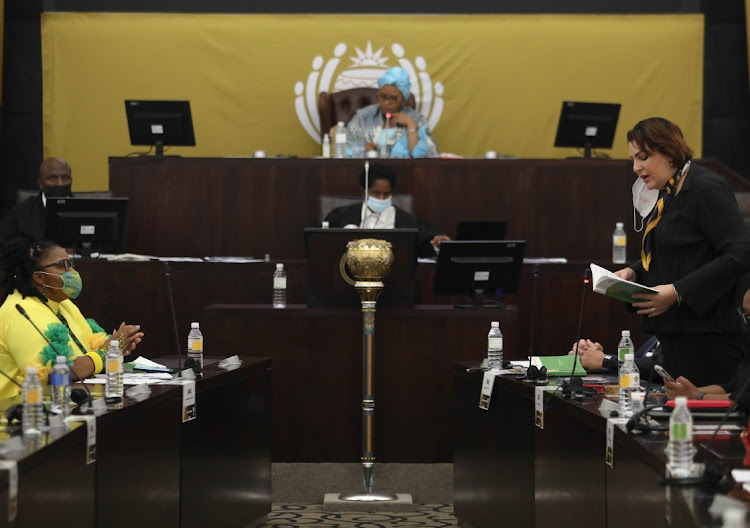 DA's Natasha Mazzone during the motions of no confidence in President Cyril Ramaphosa and his cabinet at parliament, Cape Town.
Image: Esa Alexander

Parliament’s vote of no confidence in President Cyril Ramaphosa was on Wednesday put on hold after nearly an hour of high drama in the chamber.

The motion sponsored by the ATM (African Transformation Movement) could not go ahead as a result of split views among MPs who were set to debate the motion and vote by way of an open vote after National Assembly speaker Nosiviwe Mapisa-Nqakula ruled so.

ATM had taken to court to have the vote held by secret ballot but their bid to have the matter heard urgently was dismissed. The matter will be set down as non-urgent. In light of this, the party refused to have the motion debated.

Mapisa-Nqakula argued that the matter was not sub judice as per the advice of parliament’s legal services.

ANC chief whip Pemmy Majodina argued that the motion be struck off parliament’s roll but added: “As the ANC, we are ready.” DA chief whip Natasha Mazzone echoed the sentiment.

The National Assembly will on Wednesday debate and vote on two motions of no confidence in President Cyril Ramaphosa and his cabinet.
Politics
1 month ago

Emotions ran high, to the point that Mapisa-Nqakula called MPs to order.

“People are determined to make a mockery of what is happening here.  I don’t think it is fair that we should come here being combative and engage in the manner that we are right now. I expect all of us to behave in a responsible manner.

“I cannot accept a situation where MPs are shouting at one another from their seats. It is not going to help us to be combative when we deal with this matter. The manner in which we are doing it now is like we are in some rally,” Mapisa-Nqakula said.

The EFF’s chief whip, Floyd Shivambu, said the issue was not subject to the opinion of parliament's legal office and had been a factual issue.

“The people [ATM] who have subjected the matter to judicial review are saying that they put it to court [and the matter is] currently under a normal roll.

We know that once a secret ballot comes, we are going to split the ANC vote into half and vote out your incumbent president. We have the capacity to do that, we have done it before

“Legitimately, the ATM is saying we can’t proceed fairly with a motion of confidence if we are not going to be granted an opportunity to use a secret ballot. We know that once a secret ballot comes, we are going to split the ANC vote into half and vote out your incumbent president. We have the capacity to do that, we have done it before,” said Shivambu.

ANC MPs on the virtual platform lost their cool, telling Shivambu that he was dreaming and that such would never happen.

IFP chief whip Narend Singh said there had been a clear distinction between ongoing litigation and a matter before a court of law.

“When a matter is before a court it becomes sub judice and we have to discuss it here. But here, we hear of ongoing litigation, which is not the same. Having said that, whether the matter is sub judice or not is subject for debate and discussion between legal advisers.”

He called on the matter to be referred back to the programming committee which would sit on Thursday — and take the matter forward.

The FF+ cautioned that parliament could not have a situation in which it could not function because a party had taken it court.

“We have to proceed with our business,” the party said.

The ACDP also indicated it was ready to proceed. Despite this, it agreed with the view that the matter be deferred and the issue of sub judice be referred to the rules committee for consideration.

UDM chief whip Nkabayomzi Kwankwa accused Mapisa-Nqakula of double standards after changing her mind on the issue being sub judice.

“It’s almost like you are playing 'footsie-footsie' under the table with the ATM.”

MPs had earlier called for the debate against Ramaphosa to be postponed to the next term to give Mapisa-Nqakula enough time to process the court’s decision.

After granting  parties an opportunity to express their views, Mapisa-Nqakula ruled that the motion would not proceed.

“Thank you very much honourable members, I now rule that we are not proceeding on this matter. The details of what we do next will be dealt with tomorrow at the programming committee.”

Al Jama-ah’s Ganief Hendricks said views on the motion had taken a “shocking development” but despite this, the party stood with the view of parliament’s legal services.

The DA-sponsored motion of no confidence in the entire cabinet was under way.

DA leader John Steenhuisen came out guns blazing during a protest against cabinet ministers on Wednesday.
Politics
1 month ago

DA leader John Steenhuisen leads a protest at parliament on the day of the vote of no confidence in the cabinet.
Politics
1 month ago

Ramaphosa, cabinet to face no confidence motions this week — here's how we got here

President Cyril Ramaphosa and his cabinet are set to face motions of no confidence on Wednesday.
Politics
1 month ago