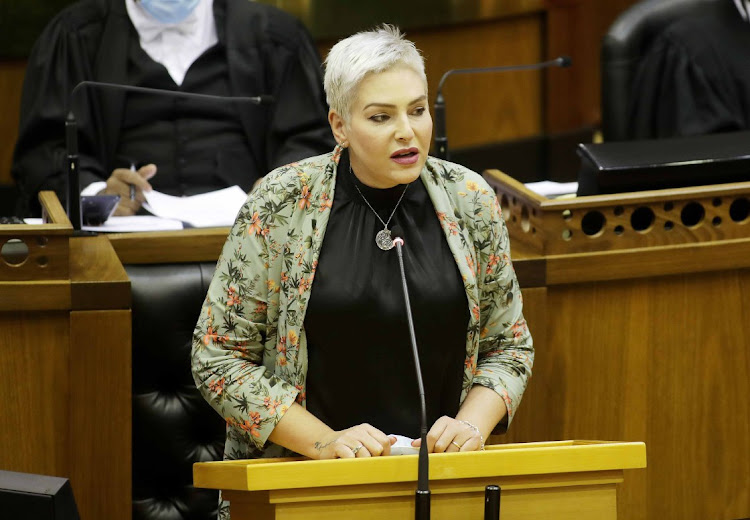 The DA's Natasha Mazonne wants clarity on when the National Assembly will deal with the Zondo report on state capture. File photo.
Image: ESA ALEXANDER/SUNDAY TIMES

The official opposition is adamant parliament does not have to wait for state capture commission chairperson chief justice Raymond Zondo to submit his final report to President Cyril Ramaphosa to do its job.

This comes after the ANC rejected the DA’s earlier attempt to have the part of the Zondo report relating to parliament dealt with by the National Assembly in the meantime.

The ANC has rejected a suggestion by the DA for parliament to start processing the state capture commission reports, especially the sections that ...
Politics
1 week ago

The DA is not budging and on Thursday, through a letter, tried to squeeze speaker Nosiviwe Mapisa-Nqakula into a corner.

“I would like to reiterate my position that I firmly believe that there is no need for the NA [National Assembly] to wait until President Ramaphosa tables the final report in the NA before we start to put mechanisms in place to process and respond appropriately to the report,” wrote DA chief whip Natasha Mazzone to Mapisa-Nqakula.

“Given the nature of the separation of powers in the republic, the implementation plan in response to the report, which the commission has given President Ramaphosa a deadline of four months from receipt of the final report to table in parliament, will mostly relate to responses to issues affecting executive (in)action.

“As President Ramaphosa has also correctly stated in his letter, parliament should be at the forefront of dealing with the issues identified by the report pertaining to parliament’s function in relation to state capture, corruption and fraud committed in the public sector.”

“We as parliament have not instituted a state capture commission. It was through the president and cabinet and therefore in accordance with the rules, the president has to bring the report formally to parliament, then we act,” she said.

“I don’t understand why we should jump the gun and not wait for the actual report to be tabled so we can follow due processes. The report is not going to vanish. We are going to deal with it as parliament, but we cannot be taking the report piecemeal. Let’s allow the report to be finalised.”

Zondo is expected to release the final instalment of his report next month.

PODCAST | Now we know SA was captured, but will knowing change anything?

The National  Prosecuting Authority and Eskom on Thursday agreed to enhance existing collaboration to ensure the most effective co-ordinated ...
News
1 week ago

"We shouldn’t second guess them, they are better placed than all of us to tell no lies and claim no easy victories," said Lamola.
Politics
2 weeks ago