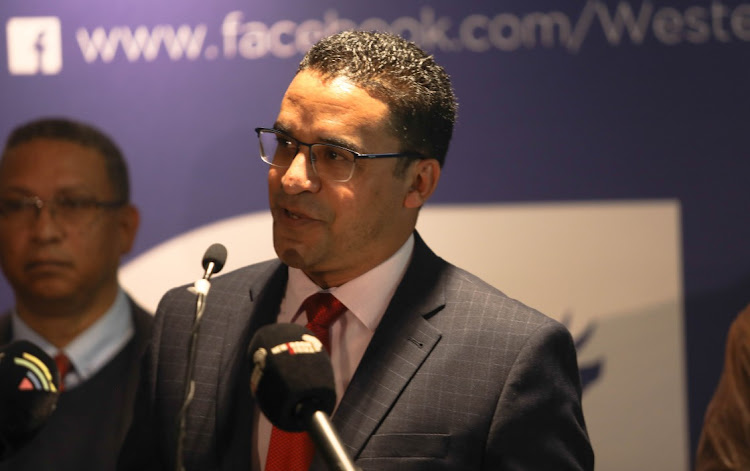 New Western Cape DA leader Tertuis Simmers was put in the spotlight as the man responsible for the collapse of coalition governments in the Western Cape.

But Simmers believes he was hard done by owing to inaccurate facts. This week the Patriotic Alliance confirmed that part of the reason it was pulling out from coalition governments with the DA in the Western Cape was because of comments made by Simmers referring to Gayton McKenzie's election as mayor of the Central Karoo district as “political thuggery”.

Simmers, in an interview with the Sunday Times on Friday, maintained he was reported incorrectly and McKenzie based his decision on incorrect facts.

“With all due respect, I have now heard that [they left] because the DA has a baas mentality that they left the coalition in the Western Cape. So what version of the reasons do you actually believe?” said Simmers.

He said the party could not blame one individual for leaving the coalition. “Political leadership is about accountability. Of all leaders, of all parties, parties always take criticism in a constructive manner,” he said.

Simmers took over as party leader of the DA at the provincial council.

He previously held the position of deputy leader until January this year when he took over from Albert Fritz who resigned from the party amid allegations of sexual misconduct.

Simmers takes over what some may refer to as a “poisoned chalice”. The last provincial leader to willingly leave the position after completing their term was current DA federal chairperson Ivan Meyer, when he stepped down in 2015.

He was succeeded by Patricia de Lille who stepped down from the position in 2017, without finishing her term, amid a build-up to the battle for the Western Cape premier position between her and her then deputy, Bonginkosi Madikizela.

Both were said to have been eyeing the position at the time. Madikizela took over the position on an interim basis and was later elected permanently, only to be forced to resign amid allegations that he lied about his qualifications.

And he was succeeded by Fritz, who was his deputy at the time, and later resigned early this year.

Speaking about the party, Simmers said he aimed to bring the DA back to basics in the province, which meant its members were all activists first and would work together towards a common objective.

“To me [the common objective] is working towards the 2024 elections to ensure that we retain the Western Cape. But not only that we retain it [but to] show further electoral growth. So that is the basic object.”

He said he accepted what the position entailed and did not fear the troubles that come with it.

Speaking about electoral losses in the party from the last two elections, Simmers said the DA as a whole was seeing a dip — not just in the Western Cape. He said however he understood that voters in the province see smaller parties as an alternative, but would see that there is no benefit in the longer term.

The official opposition is adamant parliament does not have to wait for state capture commission chairperson chief justice Raymond Zondo to submit ...
Politics
2 weeks ago

"When we work with the DA in Knysna, Matzikama, Johannesburg and Ekurhuleni we are not considered thugs. We will show you next week. Watch this ...
Politics
1 month ago