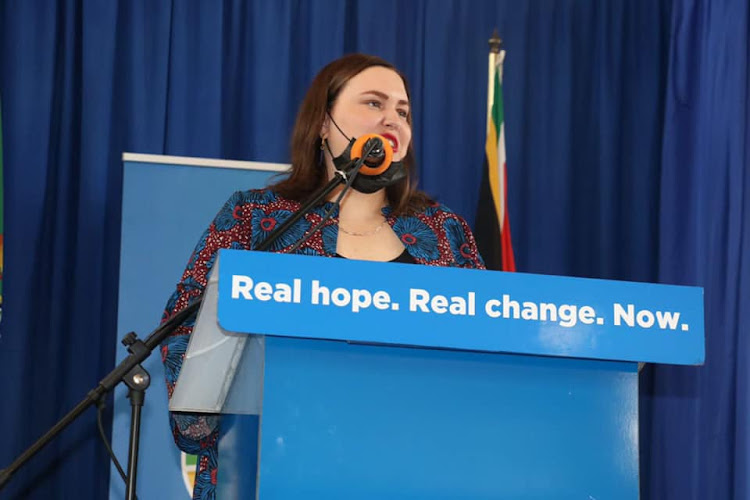 The leader of the DA in the eThekwini council, Nicole Graham, has resigned to further her studies abroad.
Image: Nicole Graham/Facebook

The leader of the DA in the eThekwini council, Nicole Graham, has resigned.

Graham, who was the party’s mayoral candidate, has been accepted to pursue a Master of Business Administration (MBA) degree in leadership and enterprise at the University of Sydney, Australia.

“This MBA is a full-time, 18-month programme that commences in August 2022. This is an incredible personal opportunity for me, and I have also been awarded the university’s MBA director’s scholarship. Notably too, I am to be reunited with my sister and her family in Sydney, and this, coupled with the educational opportunities afforded to me, means I will be making Sydney my home for a while. This has been a difficult and complex decision to make,” she said on Monday.

She said her resignation would be effective from the end of June.

“ I intend to resign from the eThekwini council entirely by the end of July 2022. I remain a committed and proud member of the DA, as I have been since 2007.”

“I have been fortunate to have had access to world-class leadership and development opportunities in and through my roles in the party. I became a member of the eThekwini council in 2011 and have served 11 years on council, first becoming a city councillor when I was 21.

“Professionally, academically and personally it is time for me to move on.”

Graham said the highlight of her journey with the party was being elected to lead the DA eThekwini team on two occasions.

“This has made me a member of the municipality’s executive committee since 2018, a role I have cherished and embraced. I would like to thank the residents of eThekwini who have supported myself and the DA. Politicians can quickly lose sight of what it is we are elected to do: represent and fight for ordinary people. You have kept me accountable, focused and fighting for what matters. I thank you all sincerely and trust the team will continue that work.

"I would also like to thank the DA for allowing me to serve and lead for so many years. In particular, I would like to thank my eThekwini team. The faith, love, and support you have shown me has been the greatest honour of my life.”

Graham said it would be remiss of her not to say the role of hard-working, honest and committed public representatives is increasingly difficult.

“This is especially true of local government, where councillors feel the constant brunt of a failing and captured state. More than ever, South Africans need to work with those who have their best interests at heart and act harshly against the rest.

“The personal toll my position has taken on me has been immense and I am looking forward to a more normal life. I would like to thank my wonderful family, friends and community for their consistent love and support. My parents, Trevor and Sandra, and my sister Kym and her family remain the best part of my life. I look forward to being able to spend more time with them.

“I entered politics to build a better, more just society and world and to build human dignity. That commitment remains as resolute as ever.”

ANC election head Fikile Mbalula has dismissed allegations that the ANC bribing its way to victory in eThekwini.
Politics
7 months ago

The rebuild: Here’s what eThekwini municipality is doing to restore water infrastructure