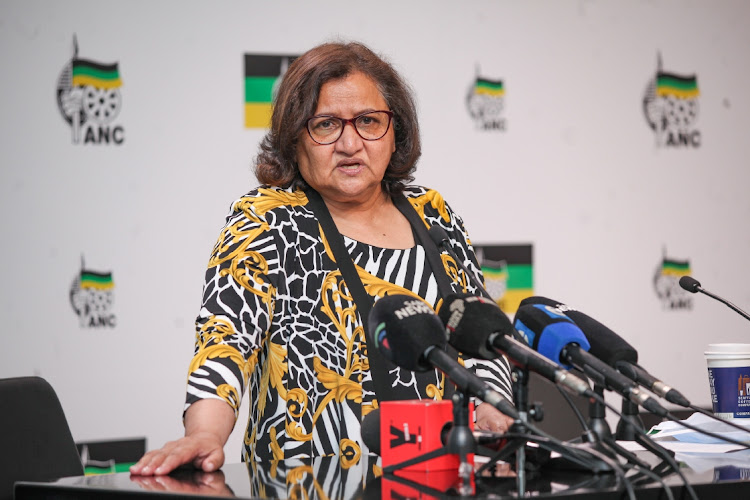 Even in her hospital bed, ANC deputy secretary-general Jessie Duarte was not at peace due to various issues plaguing her political home. But what troubled her most was the party’s regression in the representation of women in its top six leadership.

This is according to former National Assembly speaker Baleka Mbete, who delivered a moving tribute at Duarte’s memorial service at Johannesburg City Hall on Thursday.

Duarte, who died after a long battle with cancer, was buried on Sunday.

The memorial service for Jessie Duarte is taking place on Thursday at the Johannesburg city hall.
Politics
2 weeks ago

“Back in February, she sent a message that showed she was not at peace even though she was lying in hospital, when she was thinking of the organisation. She was thinking of what is going to happen in December, she was thinking about the retrogression that was registered in the last conference, whereas the conference before had elected two women officials, the last one went back and had one.”

Equal representation of women was an issue not only the ANCWL battled but the party at large, according to Mbete, who said the ANC should rectify this at its December conference.

“The correct interpretation on our 50/50 [policy] on women should be realised in the December conference. We believe a deliberate discussion must be agreed upon, structured and must enable us to have an engagement in a relevant forum to ensue, in the name of Jessie, this time, the ANC implements its stated policy position,” said Mbete.

Mbete suggested the democratic processes which elect leaders are not intentional in addressing equal representation of women, but instead “expose us to a situation where the pace of progress will crawl for the next century”.

As part of honouring Duarte’s memory, Mbete wants the party to record and compile the work she had been doing in resolving internal disputes across all branches, which Mbete described as a “permanent feature” the party grappled with.

Duarte was remembered as a dedicated member of the ANC, a unifier, a strong-willed woman who was passionate about gender equality and the fight against sexism and patriarchy.

She served as ANC deputy secretary-general for nearly a decade and for 25 years on its national executive committee.

At her memorial service, deputy president David Mabuza and former president Thabo Mbeki were among the keynote speakers.

The SA Health Products Regulatory Authority is "engaging" with tourism minister Lindiwe Sisulu's office on her comment that she secured cancer ...
News
2 weeks ago

Jessie Duarte’s brother Zane Dangor delivered a tribute on behalf of the Duarte, Dangor and Whitley families at the late ANC stalwart’s funeral on ...
News
2 weeks ago

Jessie Duarte shielded her family from her immense pain by putting on a brave face during the last days of her life.
Politics
3 weeks ago