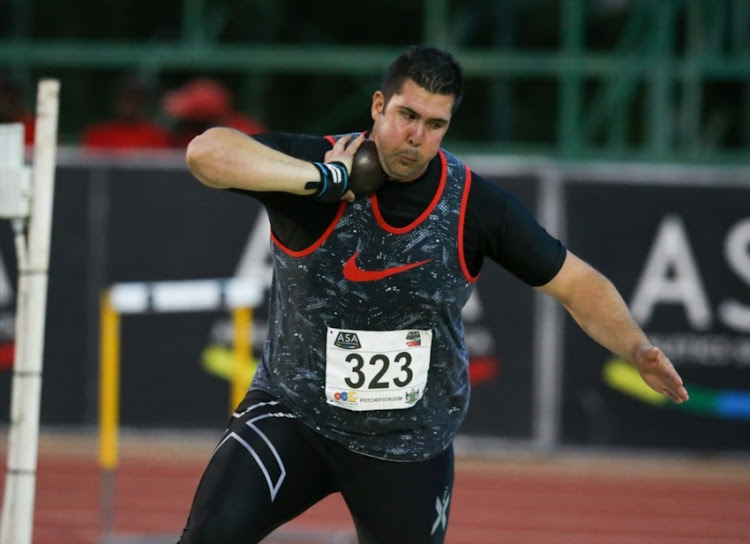 Jaco Engelbrecht received a surprise just three days before he competes at the world championships in London — his son was born earlier than expected.

“My second one was actually born just two hours ago now‚ my little boy‚ Jeandre‚” the 30-year-old shot-put competitor said at the warm-up track next to the London stadium on Wednesday morning.

That’s almost half the weight of the 7.26kg steel ball he will negotiate in the qualification round on Saturday evening.

Engelbrecht said the baby had been expected only next week.

“They were doing shopping apparently today and [my wife] said‚ ‘uh-huh‚ there’s something wrong‚ I’ve got to go to the hospital’.”

Engelbrecht said he had considered staying home for the birth.

“It was a joint decision‚ you know‚ and if you make the final [at the world championships]‚ the accolades and stuff you get can mean much more financially for my family in the future.”

Engelbrecht‚ who ended 25th at the 2015 world championships in Beijing‚ wants to be among the top 12 competing in Sunday night’s final.

“I’m looking to make the final‚ I want to get six throws in the final. That’s my big goal‚ I set it out two years ago already.

“I should have made the final two years ago‚ ag‚ ja‚ my head wasn’t right. So this time I went on a two-year programme and I want to make the final.

“Distance-wise I want to go over 21‚ with that distance I’ll see where it places me if I can get it.”

Engelbrecht added it was tricky juggling his responsibilities as a family man‚ teacher‚ coach and elite sportsman.

“It’s tough‚ you’ve still got your family life to balance‚ and you’ve got coaching after school as well‚ so I’m coaching the shot put and the rugby.

“You’re coaching until 4pm‚ 5pm sometimes and then you can only get to the gym‚ or see where you can fit in the gym and the throwing and the speed work and everything.

“Every day is a challenge‚” added Engelbrecht‚ who achieved a 20.63m personal best finishing second at the national championships in Potchefstroom in April.

His compatriot‚ Orazio Cremona‚ has freed himself of expectation going into the global showpiece.

“I didn’t even plan to come to worlds‚ I just wanted to get fit and everything just seems to be clicking so I’m not going to put any expectations on myself‚” said Cremona‚ who won the South African competition with a 21.12m personal best.

“I’m just going to go out there and do my best. I feel good … I feel in good nick and when you’re injury free you feel like you can fly.

“I had a good training session today‚ feel like the rhythm’s there‚ it’s all about keeping the head down and doing what I need to do.”

Cremona has been to the last two world championships‚ failing to get past qualification on both occasions.

Bloemfontein Celtic CEO Khumbulani Konco says the club may not be done in the transfer market yet but will await a report from new coach Veselin ...
Sport
4 years ago

Both Mamelodi Sundowns and SuperSport United have until Sunday night to register extra players for their remaining matches in this year’s African ...
Sport
4 years ago