Frittelli keeps up early momentum at the Open 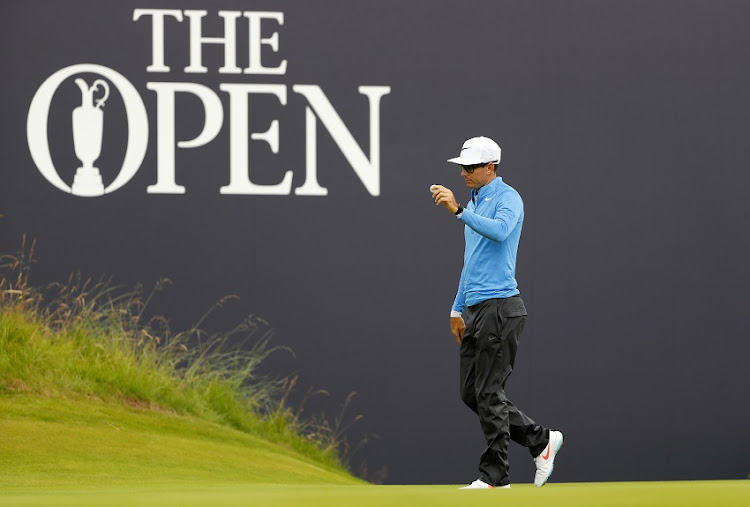 Dylan Frittelli of South Africa reacts on the 18th green during the first round of the 148th Open Championship held on the Dunluce Links at Royal Portrush Golf Club on July 18, 2019 in Portrush, United Kingdom.
Image: Kevin C. Cox/Getty Images

South Africa’s Dylan Frittelli made the most of the calmer morning conditions during Thursday’s first round of The Open Championship to card a three under 68 at Royal Portrush in Northern Ireland.

But just as he was completing his round‚ one of the brutal squalls that lashed the Dunluce links throughout the first round swept in and made the fiendishly difficult closing hole even tougher.

Frittelli bogeyed the last but his three-under score leaves him just two shots off the lead posted by American JB Holmes later in the day.

He was the best placed of the 11 South Africans in the field with Louis Oosthuizen‚ Erik van Rooyen and Branden Grace all at one-under‚ Justin Harding‚ Zander Lombard and Ernie Els posted level-par 71s.

In his third appearance at an Open Championship after Royal Birkdale in 2017 and Carnoustie in 2018‚ it was the first time Frittelli had broken par.

“At Royal Birkdale‚ on the first tee‚ I was so nervous I couldn’t hit the tee shot‚” Frittelli said after his round.

“I just built the moment up way more than it was. It’s just a golf tournament in the end. As you play bigger tournaments‚ sooner or later you get used to it and you’re able to play golf in a big moment like this.”

Although was on a chartered flight from Illinois to Northern Ireland on Sunday‚ after becoming one of the last men to qualify for the Open with his win in America‚ Frittelli didn’t have time to play all the holes in practice.

He hadn’t played the 14th to 17th holes until his first round‚ but he did have some experience‚ having played the Irish Open at Portrush in 2012.

“If I hadn't (played the Irish Open)‚ I probably would have pushed myself to play 18 on Tuesday and then nine or a few holes on Wednesday‚ which meant I would be more fatigued than I am now‚” said Frittelli‚ who teed off at 8:25 local time on Thursday.

One of the big turnarounds for the former University of Texas star golfer‚ is the mental work his has been doing with sports psychologist Jay Brunza.

The San Diego-based Brunza worked with Tiger Woods when he was younger.

“I tend to be too analytical‚” Frittelli said. “I overanalyze things‚ get a little too serious. I worked to become just a playful kid again‚ and have fun. I don’t take a bunch of practice swings. Just see it‚ feel it‚ hit it and stay really carefree.”

That approach worked well at a course where big numbers on a hole are just one poor swing‚ one unfortunate bounce‚ or one bad decision away.

Local favourite Rory McIlroy‚ who knows the course better than anyone and holds the course record of 61‚ hit his first tee shot out of bounds and never recovered after posting an eight on the par-four first. He eventually finished eight-over par and seemingly out of contention.

Woods too struggled‚ carding a seven-over 78 and other big names such as Phil Mickelson (+5) and Adam Scott (+7) also felt the brunt of the course.