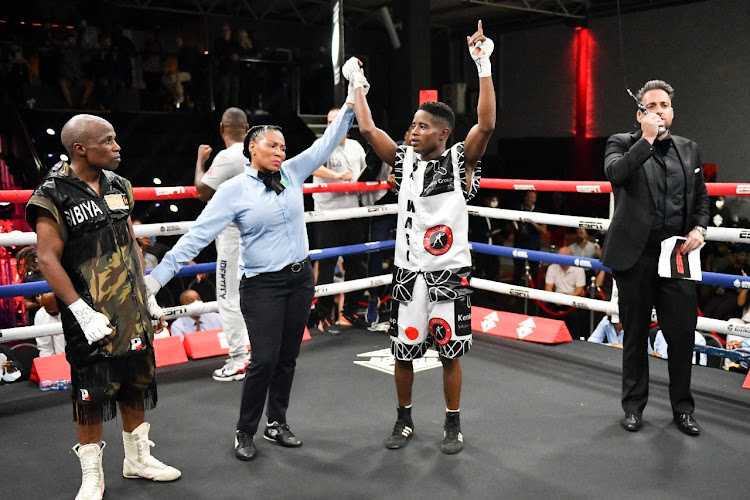 Steven Bagwasi stole a split decision win over veteran Koos Sibiya on Thursday night to win the main bout as ESPN Africa kicked off its re-entry to live boxing in Johannesburg on Thursday night.

It was a decision that could have gone the other way without any complaints, but the 27-year-old from Botswana, who improved to seven wins and loss, was considered the prospect coming into this fight.

The 40-year-old Sibiya, who now has 25 wins, 14 losses and a five draws, made life difficult for Bagwasi, making him miss and catching him with punches. He was surprised by the result. “The other guy's trainer came to me afterwards and said they'd lost the fight.”

But the journeyman who has never really had a promoter pushing his cause has found himself on the wrong end of a few decisions in his career. “Maybe if I'd been born in 1991 I would have won,” he said with a smile.

Either way, Sibiya has been a credit to boxing.

This junior-lightweight battle was clean and without dramatics, but it was a fair rescue act for a bill that had lost its headline attraction, an SA title clash, just a day before.

In essence this was effectively a development tournament, but ESPN has the potential to be a good platform for a sport that was already struggling before Covid-19 spread around the planet.

With one live tournament a month, African boxers — and especially those in SA at the moment — will get much needed action and exposure.

Koos Sibiya has grown into his Great Last Warrior moniker over the years and at 40 years old he still harbours “big dreams” — in short, he has no ...
Sport
6 months ago

The EFC venue in the northern reaches worked well and some of the boxers showed promise for the future.

Fans had little to complain about in terms of the fistic action, testament to the matchmaking skills of Abbey Mnisi, a former boxer.

The biggest mismatch came in the opening bout where Donjuan van Heerden, younger brother of welterweight campaigner Chris, won in 18 seconds, knocking out Khodani Nephalama with the first real punch of the bout, a left.

Nephalama, making his debut, toppled over like a felled tree and the back of his head bounced into the canvas with an audible thud.

The time of the stoppage would have been even quicker had the referee waved it over immediately instead of tolling out the count.

Lara van Niekerk looking to make her mark in the pool

The rapid rise of Lara van Niekerk has put SA swimming in the unique position of being able to aim at cleaning up gold in all three women’s ...
Sport
7 months ago

In the main supporting bout Kutlwano Ogaketse of Botswana was too busy, too sharp and too determined for Prince Ndlovu as he dominated their eight-rounder to win comfortably on points.

Lightweight Katlego Khanyisa displayed good form in his four-round points win over Clement Pilusa to score his second win in the paid ranks. He used his jab well and was eager to get stuck in. He could be someone to keep an eye on.

Ellen Simwaka  of Malawi arrived in the ring for her fight with Gabisile Tshabalala to find she’d forgotten to put on her breast guard, and had to dash back to the dressing room to complete attire.

But she remembered to bring her A game to the junior-featherweight contest and hammered her opponent around the ring before winning by stoppage in the fourth round after a barrage of painful body shots.

Mchunu bids to make his lifelong dream a reality

When he was a young amateur fighter in sleepy Pietermaritzburg, Thabiso Mchunu had a vision that he would win a World Boxing Council (WBC) title one ...
Sport
6 months ago

Thabiso Mchunu is so confident he’ll beat WBC cruiserweight champion Junior Makabu in the US next month, he thinks Canelo Alvarez might even change ...
Sport
7 months ago

WBC heavyweight champion Tyson Fury and Anthony Joshua will face each other at some point as that is the fight people want to see, said Todd DuBoef, ...
Sport
7 months ago