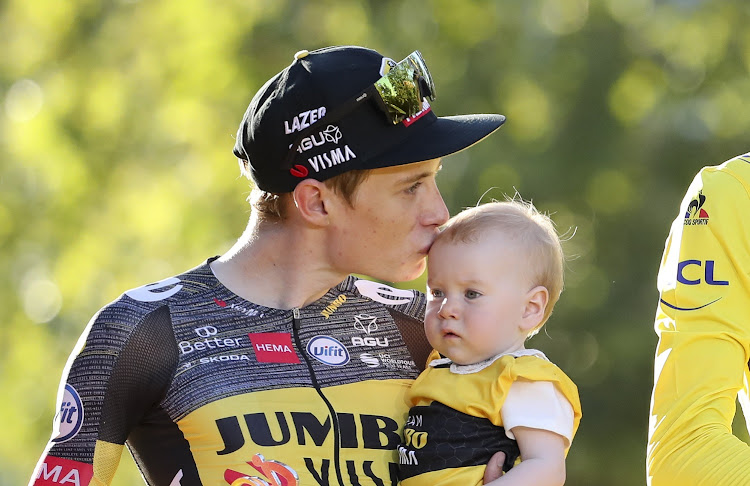 Second-placed finisher on the final stage of the Tour Jonas Vingegaard of Denmark and Jumbo - Visma holding his baby during the last stage trophy ceremony in Paris of the 108th Tour de France 2021, a flat stage of 108,4km from Chatou to Paris Champs-Elysees on July 18 2021.
Image: Jean Catuffe/Getty Images

Jonas Vingegaard claimed his maiden Tour de France title after Sunday's 21st and final stage, completing a triumph he effectively sealed in the mountains after a vintage duel with Tadej Pogacar.

The 25-year-old, who five years ago was working as a fish packer in a factory in the morning before training in the afternoon, followed up on his surprise second place last year. He finished Sunday's ride to the Champs Elysees safely in the bunch as Belgian Jasper Philipsen won the last stage in a sprint ahead of Dutch Dylan Groenewegen and Norway's Alexander Kristoff, who were second and third respectively.

Vingegaard laid the foundations of his victory in the 10th stage, when he and teammate Primoz Roglic attacked Pogacar relentlessly and made him crack in the climb up to the Col du Granon. Pogacar hit back time and time again but Vingegaard and his Jumbo-Visma team contained the feisty Slovenian, with the new champion sealing the victory when he claimed another win at Hautacam in the final mountain stage.

Overall, Vingegaard, who rocketed into the limelight last year, finished ahead of Pogacar and also won the polka-dot jersey for the mountains classification. Geraint Thomas, the 2018 champion, ended up a distant third overall in a race that took place under the cloud of Covid-19, with 17 riders pulling out after contracting the virus.

Vingegaard's Jumbo-Visma team dominated the Tour, winning six of the 21 stages while protecting the Dane throughout, especially in a moment of panic when he suffered a mechanical issue in the cobbled stage in the opening week. The Dutch team led the way into the Champs Elysees on Sunday, but they stayed at the back of the peloton in the final straight as Vingegaard and his teammates enjoyed the moment.

The softly-spoken Vingegaard, who joined Jumbo-Visma in 2019, long struggled with anxiety, which cost him in several races. But with the help of girlfriend Trine Hansen and his team management, he began to manage his nerves better and his newly-found composure was key in his progression.

Vingegaard is the first Dane to win the Tour since Bjarne Riis, who kept his 1996 title despite later admitting to doping. In 2007, another Dane, Michael Rasmussen, was kicked out of the race while wearing the yellow jersey when his team terminated his contract after finding out he had lied about his training whereabouts.

Jonas Vingegaard was poised to claim his maiden Tour de France title as the Dane retained his overall lead after avoiding a freak crash in the final ...
Sport
3 weeks ago

Child in hospital after being hit by vehicle at cycling tour

A nine-year-old child was hit by a vehicle from the Tour de France's publicity caravan and was taken to hospital, organisers told Reuters on Friday.
Sport
1 month ago

Only 3 South Africans in the Tour de France, but with 60 million behind them

May they draw inspiration from less famous cyclists back home, the postmen and other hard-working folk who are heroes on a daily basis
Lifestyle
1 month ago