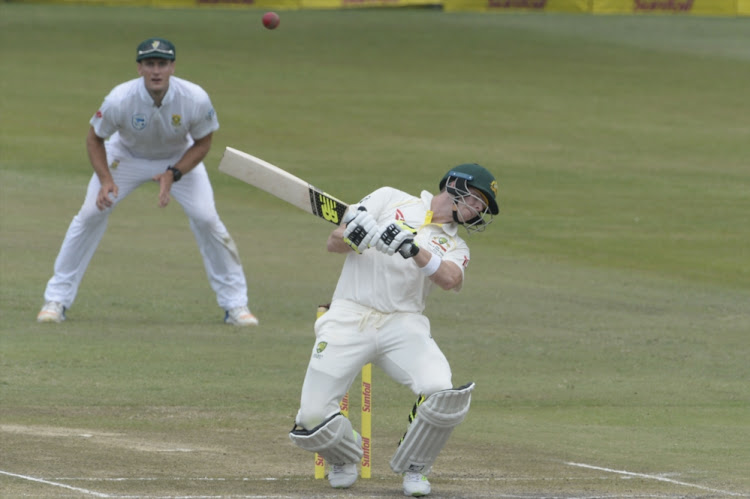 Steven Smith of Australia during day 3 of the 1st Sunfoil Test match between South Africa and Australia at Sahara Stadium Kingsmead on March 03, 2018 in Durban.
Image: Lee Warren/Gallo Images

South Africa struck thrice but Australia piled on the pain on the third day of the first test at Kingsmead on Saturday.

The visitors‚ bolstered by opener Cameron Bancroft’s second half-century in his sixth test‚ were 112/3 in their second innings at lunch‚ which gave them a lead of 301. Steve Smith was unbeaten on 16 with Shaun Marsh four not out.

Left-arm spinner Keshav Maharaj‚ who took 5/123 in the first innings‚ added two wickets to his haul.

Australia started their second dig on Saturday morning‚ and Bancroft and David Warner eased to a half-century stand.

Too many questions the Proteas' batting lineup are failing to answer

AB de Villiers has a swanky bat sponsor that's clearly reserved for some the best players in the world. It's a brand new one Sachin Tendulkar made ...
Sport
3 years ago

The partnership was ended an hour into the day’s play when Warner mistimed a pull off Kagiso Rabada and picked out substitute fielder Wiaan Mulder at mid-on.

Warner’s 28 was part of a stand of 56‚ and his dismissal was followed five overs later by Usman Khawaja’s for six when he tried to reverse sweep left-arm spinner Keshav Maharaj and gloved a looping catch to wicketkeeper Quinton de Kock.

Bancroft and Smith seemed to be settling into a lengthy partnership‚ but with their stand worth 37 Bancroft made an ill-advised dart down the pitch to Maharaj‚ who saw him coming and had him easily stumped for 53.

If you’re watching coverage of the Kingsmead test between South Africa and Australia and you hear someone say, “G’day ya cunning bastards,” do not ...
Sport
3 years ago

Three wickets in a session looks like success‚ but South Africa need to make more significant headway more efficiently against opponents who reeled in 112 runs in the 27 overs bowled.

And considering South Africa were dismissed for 162 in their first innings‚ the chances of them chasing down a target much bigger than that on a wearing pitch seem remote.