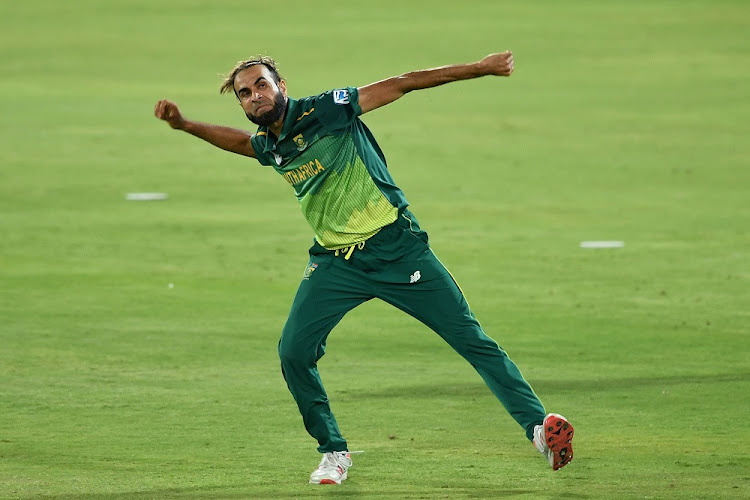 Asking how valuable Imran Tahir was to South Africa’s men’s one-day team prompts another question — how much time do you have?

No South Africa spinner has claimed more wickets than Tahir’s 173 in the format‚ and all of the seven seamers who have more scalps than him have also bowled more overs.

The next spinner on the list‚ Nicky Bojé‚ bowled two more overs than Tahir and took 22 fewer wickets.

Only Lance Klusener‚ Shaun Pollock and Makhaya Ntini have more five-wicket hauls than Tahir’s three‚ and of the 10 bowlers who have bowled at least 600 overs and have a better economy rate than his 4.65 only two are slow bowlers: Pat Symcox and Johan Botha‚ who went for 4.15 and 4.56 runs an over.

All of which is in the past. South Africa’s World Cup match against Australia at Old Trafford on July 6 was Tahir’s 107th and last ODI‚ though he remains available for T20s.

Who might fill the large hole he leaves in South Africa’s ODI attack?

Again‚ how much time do you have?

Senuran Muthusamy‚ the Dolphins slow left-armer‚ was the only spinner among the top 10 wicket-takers in last season’s franchise one-day competition.

But‚ of the bowlers who sent down at least 50 overs‚ only Marchant de Lange has a better economy rate than Cobras off-spinner Dane Piedt’s 4.38.

Keshav Maharaj? The left-arm spinner who has made the South Africa Test berth his own by taking 94 wickets at an average of 28.44 in 25 matches has struggled to make that kind of impact with the white ball.

Just four of his 92 list A games have been ODIs‚ in which he claimed six wickets at an economy rate of 5.32.

That’s short of the standard set in ODIs this year‚ in which Afghanistan off-spinner Mujeeb Ur Rahman‚ Tahir and Mohammad Nabi‚ another Afghan offie‚ have been the most miserly bowlers in the game — regardless of style — among those who have sent down 100 and more overs with economy rates of 3.97‚ 4.44 and 4.56.

But Maharaj is clearly in ripping form‚ having reaped 20 wickets at 19.95 in three matches for Yorkshire in the past month.

Thing is‚ those were first-class games. He has claimed as many wickets over the course of an entire season in list A cricket only twice in his career‚ and not since 2011-12.

Replacing Tahir was never going to be simple‚ but it promises to be one of the more vexed questions facing a team not short on conundrums.

He is likely to be part of South Africa’s next white-ball assignment‚ a T20 series in India in September.

So whoever succeeds him will have the chance to make a name for themselves sooner rather than later.

Whatever happens‚ it won’t be boring.