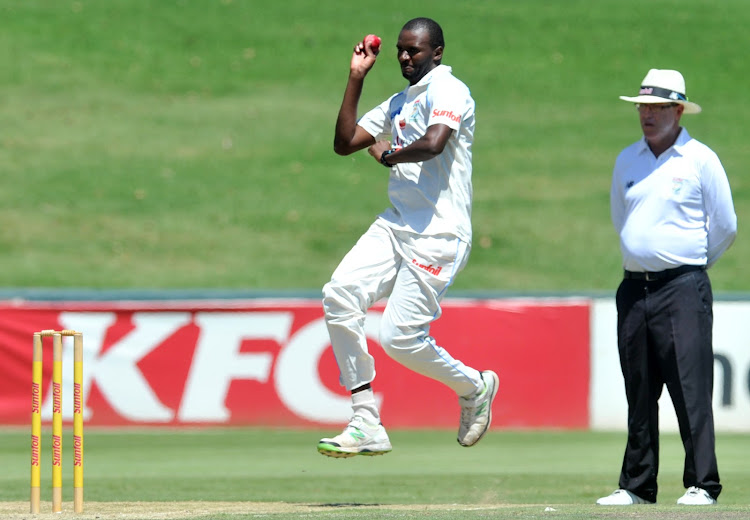 Ethy Mbhalati in action during his time at the Titans in March 2016.
Image: Samuel Shivambu/BackpagePix

Former South Africa ‘A’ fast bowler Ethy Mbhalati on Tuesday lifted the lid on allegations of institutionalised racism at the Northerns Cricket Union (NCU) in Centurion and said the team has shattered the careers of many highly promising black cricketers.

In a no-holds barred exclusive interview with TimesLIVE‚ Mbhalati gave a detailed account of a system that he said was designed to frustrate black players.

He said the same system is also rife at national team level in the Proteas side.

WATCH: Former SA 'A' and Titans fast bowler Ethy Mbhalati urges black people in cricket to come out and share their experiences of discrimination. pic.twitter.com/kaCp6SJh1w

The 38-year-old Mbhalati‚ who was forced to retire in 2016 after he was banned for 10 years for failing to report an approach by a match fixer‚ said he encountered discrimination for most of his 14 years at the franchise.

Some of the experiences that he encountered include:

TimesLIVE sent a list of questions to the Northerns Cricket Union for a right of reply but they had not responded at the time of publishing the story.

Their responses will be added to the story as soon as they are available.

“Club cricket is worse because we have been called monkeys and many other things while playing there‚" said Mbhalati‚ who claimed almost 600 First Class‚ List A and T20 wickets in 350 matches.

"I have seen younger white players fresh from high school who never played club cricket get contracts of R400‚000 per year while black players with franchise experience were on R200‚000 a year.”

Mbhalati revealed the frustration he felt in the change room when players and coaches spoke in Afrikaans‚ a language he did not understand.

“In the early stages of my career‚ I experienced a dressing room barrier where they used to talk in Afrikaans while they knew very well that I didn’t understand the language‚" he said.

"But they just didn’t care.

"You will have incidents where if something goes missing in the dressing room‚ the first suspects are always black players and when that thing is found later‚ no one comes to apologise.

“When black players talk and laugh loudly‚ it was always an issue to the white players who would say 'guys please you making noise'.

"But when they are drunk and loud‚ and start doing funny things like running naked onto the pitch or throwing up in the dressing room‚ they expect us to laugh.

“So yes‚ there is institutionalised racism at Northerns and there are many other black players who are willing to come out and share their experiences.

"I have had experiences where a player will come back from the Proteas out of form and they would drop me so that he could play to regain confidence. When you talk to the management‚ it’s like you are talking to a wall.

“Unfortunately when you questioned things‚ the system kicked you out and we were scared to lose out jobs.

"We used to say 'don’t fight the system because it will kick you out'‚ that was our motto all the time.

"Black guys who used to question things were kicked out and most of them are in Atteridgeville and in Mamelodi.

“When black players questioned certain things‚ they said we had attitude problem and we were lazy‚ but when a white player did the same thing‚ they said they were good leaders.

"I remember during pre-season camps‚ we would come back after three weeks but it would always be mostly black‚ coloured and Indian players reporting back.

"When we asked where some of the missing white players were‚ they would tell us that they had been given more time off.”

Mbhalati said he was triggered to open up about his experiences in cricket after he saw the attack on SA fast bowler Lungi Ngidi for supporting the Black Lives Matter movement.

The images of West Indies legend Michael Holding breaking down in tears while recalling his own experience with racism also stirred him into action.

“I was touched when they started attacking Lungi after he spoke about his support for the Black Lives Matter movement‚ it hit me very hard to see that these things still exist‚" he said.

Cricket South Africa may be accepting of the Black Lives Matter movement‚ but they also need to brace themselves for uncomfortable truths that may ...
Sport
1 year ago

"I know Lungi is a sweet guy‚ just imagine how he is going to feel at the national team knowing that some of his team-mates agree with Boeta Dippenaar and Pat Symcox.

“I also gained the strength to talk when I saw Michael Holding crying on television in front millions of people all over the world while talking about racism.

"I was also happy to see someone like Ashwell Prince coming out to express his opinions about this matter.

“My wish is for all the black players‚ administrators‚ coaches‚ and even the grounds men‚ people who are cleaning and making tea in the offices‚ to come out and share their stories.

"If all black players come out to tell their stories‚ this country will be shocked.

"All these bad things start from the lowest level of the game all the way to the Proteas. Guys who are with the Proteas now or were there before must come out and talk about their experiences because we know what is happening there.”

Mbhalati played for South Africa ‘A’ for eight years but never graduated to the Proteas.

He revealed the heartbreak he felt when he realised that he would never be given a chance to play for his country.

“I played for SA A from 2004 until around 2012 and on a number of occasions I asked why I was not being selected for the Proteas‚ but there was never a good answer.

"I remember in the build-up to the 2011 World Cup‚ I was doing very well and I was in the preliminary squad.

"Just before the squad was announced‚ I got a call from one of the selectors who told me that I was not picked because of experience.

"I asked the selector how was I going to get experience if I was not given the opportunity to play at a World Cup.

“He said I would get my opportunity when Makhaya Ntini retired but I told him that I want to play with Makhaya so that he could mentor me.

"I was hugely disappointed and that experience broke my heart more than anything else I have seen in cricket.”

When asked if it is acceptable that Mbhalati never got an opportunity to play for the Proteas despite having been part of SA ‘A’ for about eight years‚ CSA said in a response: “Selection remains a subjective matter‚ and while decisions made nine years ago and more cannot be changed now‚ Cricket South Africa remains committed to transformation in the game at every level‚ in line with its 2019 Transformation Charter.

"Fast-bowler Ethy Mbhalati debuted professionally in 2002‚ and played for various major teams‚ including Northerns‚ Northerns B‚ South Africa A‚ South Africa Emerging Players‚ South African Invitational XI‚ and the Titans. During his time playing for the South Africa A squad from 2003 to 2011‚ he played four first class matches and 11 limited overs games. He took 10 wickets across all the first class matches he played‚ and 15 wickets in the 11 limited overs games. His career ended when he was one of four Titans players banned from the game for 10 years for match fixing in 2016."