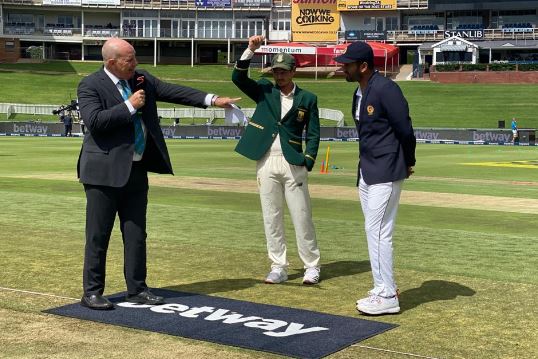 Sri Lanka won the toss and captain Dimuth Karunaratne chose to bat  in the second and final Test against SA at the Wanderers Stadium in Johannesburg on Sunday.

The Proteas announced an unchanged team from the one that thrashed the visitors by an innings and 45 runs in the first Test in Centurion last week to take a 1-0 lead while Sri Lanka handed out two debuts to make up for the injuries that crippled them in the opening Test.

Minod Bhanuka and Asitha Fernando make their Test debuts while Lahiru Thirimanne and Dushmantha Chameera are also in the team.

Kagiso Rabada was seen doing running exercises around the field shortly before the national anthems were sung and misses out again as he recovers his sharpness and the team management opting to go with the same side that did duty in the first Test.

The Proteas are aiming to whitewash the Sri Lankans 2-0 and gain valuable points on the ICC World Test Championship rankings where they languish sixth out of nine nations.

The Proteas went into the match second from bottom but the massive victory that earned them 60 points in the first Test catapulted them to sixth.

Big tests for Proteas in the coming year

The Proteas are going to rest fast bowler Kagiso "KG" Rabada for the second and final Test against Sri Lanka starting at the Wanderers in ...
Sport
1 year ago