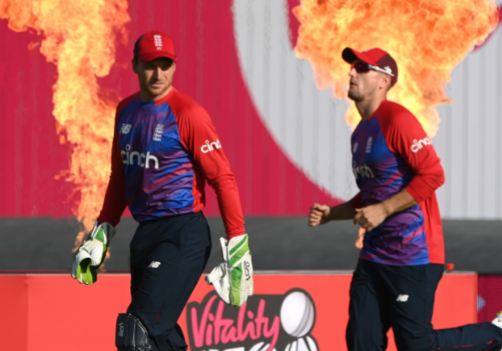 The white-ball match was the last home T20 for Eoin Morgan's England side before the Cricket World Cup in the United Arab Emirates and Oman in October.
Image: @englandcricket/Twitter

England beat Pakistan by three wickets, and with two balls to spare, in a thrilling third T20 international at Old Trafford on Tuesday to win the series 2-1.

Pakistan, who won the toss and opted to bat in front of a noisy 20,000-strong crowd on a dry wicket, had set England a target of 155 in Manchester with opener Mohammad Rizwan top scoring with 76 not out.

England were cruising half way through their innings but the loss of Jason Roy, caught by Fakhar Zaman on 64, at the halfway point left the hosts sweating in a breathless finish as the Pakistan spinners went to work.

The white-ball match was the last home T20 for Eoin Morgan's England side before the Cricket World Cup in the United Arab Emirates and Oman in October.

Former Titans and South Africa A fast bowler Ethy Mbhalati has said he was paid way less than his white junior teammates throughout his ...
Sport
1 week ago

The Proteas top order batting and death bowling is still a cause for concern as the T20 World Cup draws closer‚ but Enoch Nkwe‚ the national team’s ...
Sport
1 week ago

Former Titans star bowler Ethy Mbhalati has said that management at the Centurion-based union deliberately blocked his selection to the Proteas.
Sport
1 week ago

Spinners Tabraiz Shamsi and George Linde shared six wickets between them as the Proteas beat hosts Ireland by 33 runs in Dublin on Monday to take a ...
Sport
1 week ago

There were tears of sorrow from black former cricketers at Cricket SA's (CSA) transformation inquiry hearings this week as they relived their ...
Sport
1 week ago