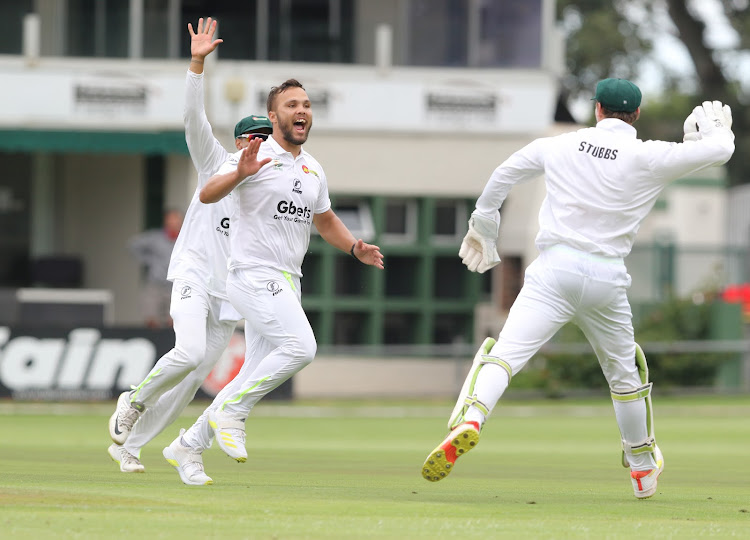 The Warriors' Dane Paterson grabbed the headlines as he claimed seven wickets for just 25 runs against the Rocks.
Image: Cricket South Africa

Marques Ackerman’s century blasted the Dolphins to a maiden victory of the campaign over the previously unbeaten Lions in the Cricket SA (CSA) 4-Day Series.

Dolphins captain Ackerman struck 21 fours on his way to an unbeaten 139 off 127 balls as the home side claimed an eight wicket triumph after being handed 257 runs as the target for victory on Sunday's fourth day, after the Lions declared their second innings on 166/6.

Despite Dominic Hendricks’ efforts of 72 off 164 balls (11 fours) for the visitors, helping them set a daunting target, the Dolphins responded with a dominant 260/2 to seal the result. Grant Roelofsen (54 off 70; 9 fours) and Khaya Zondo (53 off 90 balls; 6 fours) also chipped in.

Elgar happy with Proteas’ response after some ‘hard chats’

At St George’s Park in Gqeberha, the Warriors resumed to add 59 runs to their overnight score, with Tristan Stubbs (52 off 115; 7 fours) notching up an important half-century before his side were bowled out for 356 to set the Rocks a target of 342 to win.

Fast bowler Paterson grabbed the headlines to claim seven scalps for just 25 runs, including four of the top five Rocks batters, to help leave them 93/7 while matching his best wicket tally in an innings as the visiting side were removed for 174.

Pieter Malan top scored with 41 for the Rocks, but his side fell 168 runs short of the target to give the Warriors a stunning victory.

Due to persistent rain, there was no play possible for the second consecutive day at the Mangaung Oval between the Knights and Western Province with the match ending as a draw.

In the second division, the Northern Cape Heat clinched a commanding 253-run win over the Eastern Storm at Willowmoore Park in Benoni after the Kimberley-based outfit declared for the second time in the clash, this time on 332/6, before dismissing the Storm for 192 to take the game.

The contest between the Tuskers and South Western Districts finished as a draw after time ran out in the Western Cape side’s second innings, with Yaseen Valli (57 not out off 109; 6 fours) and Andre Malan (59 not out off 116; 8 fours, 1 six) left stranded at the crease.

In White River, after three days of wet conditions, the clash was declared a draw with Mpumalanga Rhinos and Limpopo Impalas captains shaking hands.

The next CSA 4-Day Domestic Series round gets under way between January 27 and 30, with the action streamed live on SuperSport’s YouTube channel.

Proteas fightback against India one of SA cricket's finest moments

The Proteas' come-from-behind 2-1 series win over India has been heralded as one of their finest.
Sport
5 months ago

SA pulled off a remarkable, come-from-behind 2-1 series victory over number one test nation India on Friday with a second consecutive seven ...
Sport
5 months ago

India captain Virat Kohli says the team's batting line-up "must be looked into" for Tests away from home as he pinned the blame for the team's 2-1 ...
Sport
5 months ago