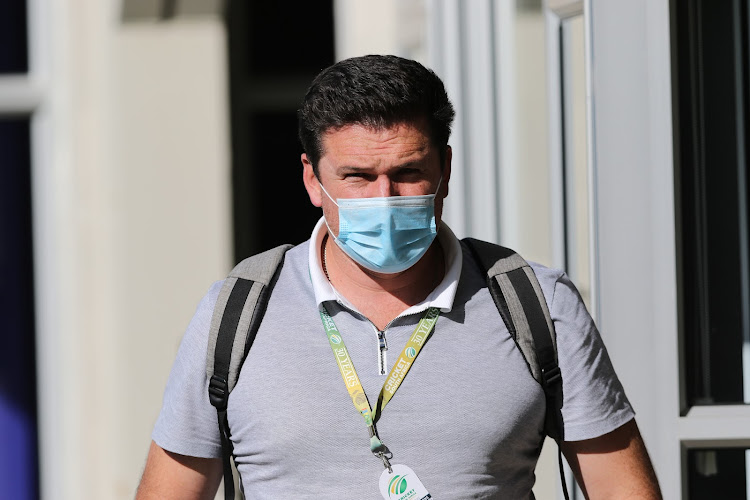 Graeme Smith served as Cricket SA's director of cricket from December 2019 to the end of March 2022 when his contract was not renewed.
Image: Richard Huggard/Gallo Images

Graeme Smith has been cleared of racism allegations, his former employer Cricket SA (CSA) has confirmed.

Smith, the former captain who served as director of cricket from December 2019 and left at the end of March 2022 after his contract was not renewed by CSA, stood accused of racial prejudice against black former players and leadership figures in the body.

The SJN report, among other things, found that Smith, the longest-serving captain in Test cricket, racially discriminated against former player Thami Tsolekile during their playing days between 2012 and 2014.

The SJN, chaired by Dumisa Ntsebeza SC, said its findings were “tentative” and called on CSA to investigate further.

Oral evidence in the arbitration between Cricket SA and its director of cricket and former captain Graeme Smith proceeded without hold-ups last week ...
Sport
3 months ago

The report also found Smith looked down on black CSA leadership at the time but the two independent arbitrators cleared the 41-year-old former player.

Oral evidence in the arbitration proceeded without holdups last month, and closing arguments were heard on March 22.

CSA said the findings and evidence from the SJN process were placed before the arbitrators and witnesses were called and cross-examined by both sides.

“There was no evidentiary basis to conclude Mr Smith engaged in racial discrimination against Mr Thami Tsolekile during the period 2012 to 2014,” the arbitration award released by CSA late on Sunday night stated.

“There was no evidentiary basis to conclude Mr Smith was racially biased against black leadership at CSA.”

“There was no evidentiary basis to conclude Mr Smith’s appointment of Mr Mark Boucher, rather than Mr Enoch Nkwe, as coach of the men’s Proteas team in 2019 amounted to unfair racial discrimination,” CSA said.

“Now that finality on these processes has been reached, it is appropriate to recognise the extraordinary contribution Graeme has made to SA cricket, first as the longest-serving Test captain in cricket history and then as director of cricket from 2019 to 2022,” said CSA chair Lawson Naidoo.

“His role as the director of cricket has been critical in rebuilding the Proteas men’s team in particular and has laid a solid foundation for his successor.

“We fully appreciate that after his time as the director of cricket Graeme wants new challenges in the commercial and cricket worlds.

“He has a long career ahead of him and we very much hope he will still work in the cricket world in appropriate capacities going forward.”

CSA CEO Pholetsi Moseki thanked Smith on behalf of the executive committee for his time and efforts.

“I would like to thank Graeme for all he did as the director of cricket,” said Moseki.

“He put up his hand during a particularly tumultuous period for CSA and he has often gone beyond his contracted duties to assist CSA during his term.”

CSA said it “regrets” Smith has had to endure public disclosures of his personal information, including his alleged R5.4m annual salary, even though remuneration of the executive is publicly available in the organisation’s financial statements.

Ben Stokes has backed Joe Root to continue his run-scoring spree with the bat, offering his England team mate "nothing but love, respect and support" ...
Sport
2 months ago

Former England batter Rob Key has been appointed as the managing director of the country's men's cricket team, the England & Wales Cricket Board ...
Sport
2 months ago