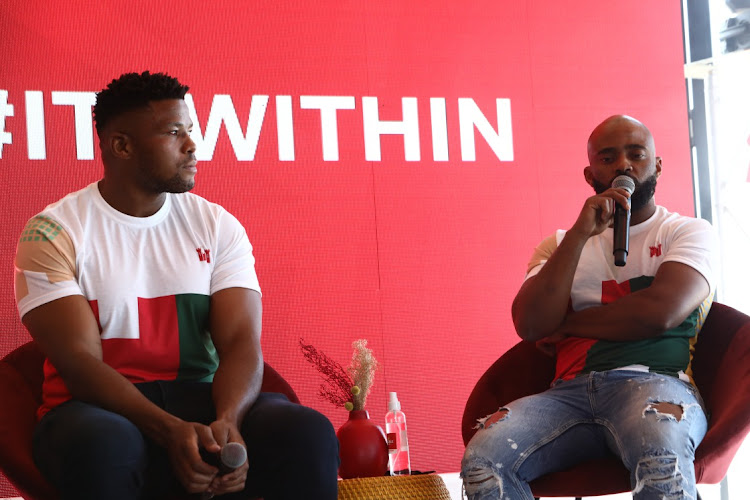 Springbok prop Lizo Gqoboka and Proteas player Temba Bavuma talk about their upbringing and the work they do outside their sporting codes to uplift their communities in the Castle Lager launched “It’s Within” campaign in Thembisa on May 25 2022.
Image: Masi Losi

Proteas limited-overs captain Temba Bavuma says the national team players they are relieved that the charges of gross misconduct and racism against coach Mark Boucher have been dropped and the issue resolved.

Cricket SA (CSA) announced in early May that it had decided to withdraw all charges against Boucher which led to the abandonment of a disciplinary hearing scheduled to start on May 16.

The charges were brought after allegations emerged in CSA's social justice and nation-building (SJN) hearings, including from the testimony of former SA teammate Paul Adams.

Bavuma said Proteas players hoped that as the matter had been put to bed, the focus could shift to the team's ambitions on the playing field.

“I think there’s been a lot of relief from the guys that things seem to have been resolved or settled,” Bavuma said, speaking at a Castle Lager “It’s Within” event aimed at empowering township business, held at Imbizo Shisanyama in Mall of Thembisa on Wednesday.

“As players, I think we welcome that we can be in a space where cricket can be the main focus and the headlines in the media are not dominated by the issues off the field.”

Bavuma said the waiting period around the coach's DC had been a tough time for Boucher and the players. It had also allowed them to have necessary burning conversations.

“I think we’ve dealt with that as well as we could. We haven't shied away from having the conversation we needed to around issues we felt needed to be discussed.

“And I do think we’ve grown as a team. So, yes, we are looking forward to a space where we can answer questions regarding cricket in our media interviews.”

The Proteas head to India soon for a five-match T20 series starting on Thursday June 9.

The series will also mark the start of SA’s preparation for the ICC T20 World Cup in Australia from October.